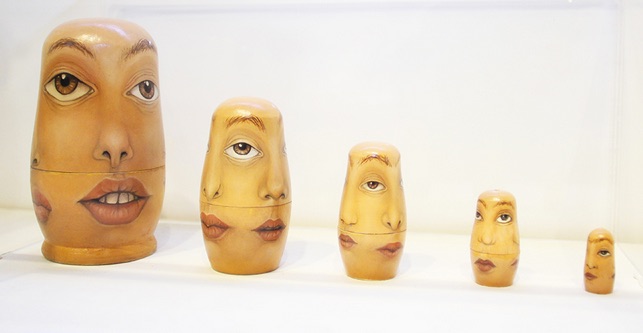 Russian Nesting Dolls aren’t exactly considered on the cutting edge of the art world; The first one was carved over 100 years ago. And yet, despite its descendancy from “classic piece of Eastern European art” to “thing on bubbie‘s shelf,” the matryoshka’s deviously simple “stuff-within-stuff” construct seems ripe for reinvigoration, if not outright reinvention. After all, we live in an age when simply visiting the Container Store can be a calming experience amidst the hustle and bustle of our busy lives. By all rights, the humble matryoshka should have a role to play in the lives of those of us for whom compact and modular reigns supreme.

Taking place in Tel Aviv’s Kuli Alma gallery/performance space, the first Babushka International Art Exhibition seems poised to bring this classic form into the 21st century. In an interview with Cool Hunting, exhibition founder and Israeli graffiti artist/curator Mas, explained what brought sixty different contributors, from across both the artistic, and actual, world to Tel Aviv for this opportunity to reboot the Russian Nesting Doll:

I have always been interested in media from times past, specifically artistic relics and mediums that have since been disregarded as stale and irrelevant. The Babushka International Art Exhibition superimposes this traditional art form to the new world of street art and graffiti, a reimagining of sorts. Each artist featured in the exhibition received the same set of five wooden Matryoshka dolls, and were asked to create their work without specific boundaries or pre-imposed artistic direction.

In addition to street art, dolls on display also bear the marks of tattoo art, or even dadaist influences. Cool Hunting has images of some of the more impressive dolls on display, as well as the full interview with Mas, and other artists involved in the exhibition.

BIAE runs through Nov 21st in Tel Aviv before shipping out to London, Warsaw, Berlin, and Milan in 2015. If you’re in the neighborhood, we recommend you head over to see some matryoshka’s you definitely wouldn’t find on your grandmother’s mantlepiece.