Taking Pictures Of Sheldon Adelson Compromises His Security (Or Something?)

Oh Sheldon Adelson, you ultra-rich ultra-douche, is there anything you can’t take and make it all the more ridiculously obnoxious? 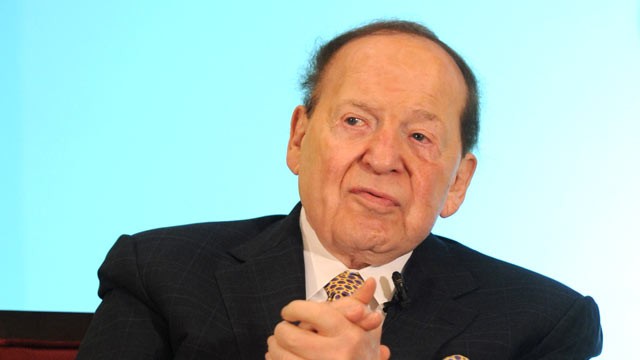 As reported by the Associated Press, Sheldon Adelson, chairman and CEO of the Las Vegas Sands Corporation, and the 24th richest man in the world, made a rare courtroom appearance in Las Vegas on Thursday. Adelson’s Sands Corporation is currently being sued for upwards of 300 million dollars by businessman Richard Suen for breach of contract and money owed, following Suen’s claim he successfully arranged licensing for The Sands Corp to open casinos in the Chinese Administrative region of Macao.

The AP reports that, upon taking the stand in defense the Sands Corporation, Adelson, 79, risked being held in contempt of court by supposedly waving around pamphlets advertising his Macao holdings – pamphlets which had not been cleared by the court as evidence (Adelson was ultimately cleared, and no mistrial was declared). But, here’s where things start to get a little weird. Like, Howard-Hughes-Tissue-Box-For-Shoes weird. According to the AP:

Sands’ lawyers have sought to limit media access to the mogul’s testimony. The team brought in Harvard professor Alan Dershowitz, a renowned advocate for open court proceedings, to help argue that press photos of Adelson’s day in court could threaten the 79-year-old billionaire’s security.

That’s right. According to Sheldon Adelson (via The Dersh, who makes a living these days as a professional giver-of-unsolicited-opinions) the act of simply taking pictures – in the courtroom – of one of the wealthiest people on Earth could threaten his security. Apparently it’s not the very-real risk of losing over 300 million that worries Adelson (admittedly, anything under a billion bucks is probably chump change for Sheldon; He pretty much wasted a cool hundred mil during the 2012 election alone) – it’s having his picture taken.

Look, I’m all for letting public figures have their privacy. But, don’t try to tell me someone whose net worth is more than a small country is really that scared of a courtroom photograph. After all Sheldon, isn’t your fortune entirely dependent on a casino context wherein people risk losing their money while under constant camera surveillance? Just be honest, and say you don’t want any courtroom pictures because it makes you look like…Id’know? Someone who’s being sued?

In any case, the AP reports that Adelson’s request for no courtroom cameras was “rejected”.

Leave a Reply to Billion Dollar Babysitters: How the Super-Rich Protect Themselves Cancel Reply