If there’s a medium Sarah Silverman can’t conquer, I’ve yet to find it; She’s been on stage and screen (both big and small), written bestselling books, and, as of today, is an official part of Marvel Comics canon. Yes, Silverman is making her comic book debut in Deadpool #40, which sees the foul-mouthed comedian join forces with the equally vulgar “Merc with a mouth” to take a stand against the environmentally damaging practice of fra… er “gracking”

She’s always up for fun and we thought this would be a way for her to do something and appear somewhere where she hasn’t before. She won an Emmy this year and is doing movies along with her stand-up. But now she can say she conquered comics. You know, it sort of came out of it being a fun gag but then also sort of including a voice who already politically active. I mean we had another name in the running, but since we know Sarah we thought it’d be fun to not have to cut through the red tape.

The issue, co-written by fellow comedian Brian Posehn, is “sponsored” by Marvel’s fictitious Roxxon corp.  In it, an illustrated Silverman – alongside Marvel writers Jason Aaron & Jason Latour – protest that company for its eco-unfriendly policies. There’s also monsters, and – as is typically the case when Deadpool is involved – a fair amount of over-the-top comic book violence. 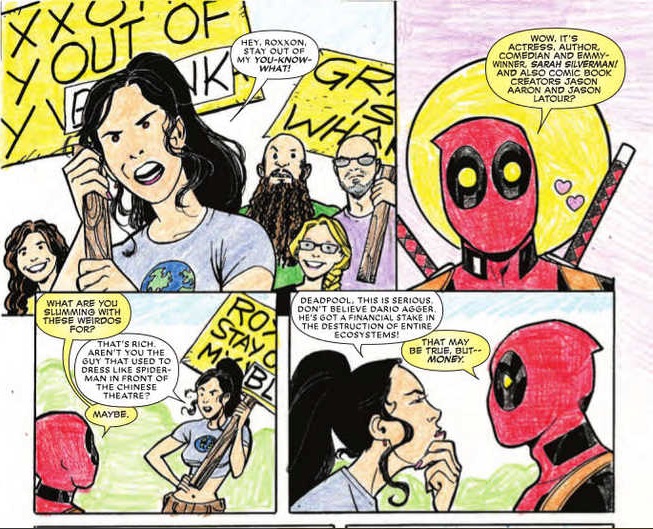 Deadpool #40, is written by Gerry Duggan, and Brian Posehn, with art by Scott Koblish. It’s available wherever comics are sold.