We all know the sound – that unmistakable clanging which echoes through cavernous downtown streets and shopping mall parking lots. When faced with irrepressibly chipper Salvation Army bell-ringers most Jews smile, nod their head, maybe toss a few coins in the bucket, and go about their business relieved to have avoided a potentially disastrous breach of the fragile “Happy Holidays” truce which governs the winter months. “After all…” your average Jewish shopper probably reasons “they’re an army! I don’t want to cause any trouble. I’ll just be on my way.”

In an email to Heeb Dave explains:

The Salvation Army bell ringers have become a part of our culture.  Some people love them, some people don’t.  Seeing them on the streets of NYC again this holiday season, I saw an opportunity to make a fun holiday video.  I didn’t really know what I was going to shoot with them, until I was in my parents house and found an absurdly large bell. My mom collects antiques so, for some reason, she had an authentic antique cow bell from Switzerland. I thought it’d be funny if I just went up to the bell ringers with a louder bell, but that wasn’t enough.  I needed to form an “organization” to raise money for. 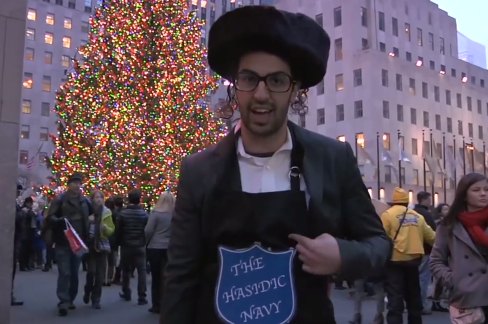 So, Swiss bell in tow, Dave brought the full military might of the Hasidic Navy to bear on the streets on New York.

Okay, it’s not quite Fleet Week. But Dave (who, along with Ethan Fixell, you may recognize from his multiple Tonight Show visits as part of the “Dave and Ethan” comedy duo) is quick to mention that the Hasidic Navy’s landfall did actually end up doing a fair bit of good:

In total I received about $30 in donations to the Hasidic Navy.  In addition, small crowds would form around us, since I was being so loud and it must have been funny to see a “hasidic” person dancing with a Salvation Army person.  The added attention actually lead to a bunch more donations to the Salvation Army.  The guy in the video that I danced with a bunch wanted me to stay because that “was the most he’d made in the whole week”.

Now granted, the Salvation Army as a Church has a  very shitty track record on some pretty important issues (*ahem*gayrights*ahem*). But as Dave points out – your average bell ringers on the street:

…are some of the nicest, sweetest people I’ve ever met.  Who else rings a bell in the cold to raise money for charity?