Production on Third Harold and Kumar Has Begun 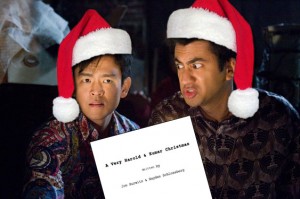 Stoners rejoice: Screenwriter Jon Hurwitz tweeted yesterday that production has officially begun on the third Harold and Kumar installment. The plot this time around? It’s Christmas, and Patton Oswalt and Neil Patrick Harris will join the pair in their pot-addled adventures in the Dirty Apple.

There’s no word yet on whether the bong-infatuated Jew neighbors Rosenberg and Goldstein (Eddie Kaye Thomas and David Krumholtz, who earlier this year took both the 22 and 21 spots in our 100 Greatest Jewish Movie Moments for their turns in the first two flicks) are on board, but rest assured that A Very Harold and Kumar Christmas is rife with psychedelia.

Slashfilm.com has reported that the script includes a five-page claymation sequence in which H and K, high on psychoactive eggnog, are chased through midtown by a giant evil snowman in 3-D. That alone seems worth keeping a kind stash airtight for the opening weekend, sometime in December 2011.