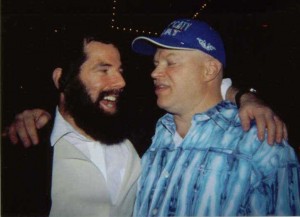 If it weren’t for Don Barris’ commitment to his trade, his dim-witted pal Parry Karavello would be drinking rubbing alcohol on a street corner right now, and, worse, the 2003 made-for-Comedy Central documentary that Vice Magazine called “the greatest movie of all time,” would have never been made.

But praise Barris. The warm-up comic for Jimmy Kimmel Live and the closing act at The Comedy Store (pictured right, opposite random Hasid) for being one of the masterminds behind Windy City Heat, a culmination of his 11-year prank played on Caravello, who Barris (with director Bobcat Goldthwait and crew in tow) tricked into thinking he was the star of a sexy gumshoe noir.

Heeb asked Barris about that epic scene in which he tortures Parry over a banana as they watch a group of Jewish prisoners play basketball with their Nazi oppressors. “Most of the movie was improvised, but that scene was written beforehand,” Barris said. “We had to have some action going on around Perry so we were, like, ‘Let’s have some Nazis play a group of Jewish POWs. Call it Schindler’s List 2.’  Okay, Bingo. We had a little budget from Comedy Central, and we made it happen.”

Watch the clip from Windy City Heat below to see Barris in action.