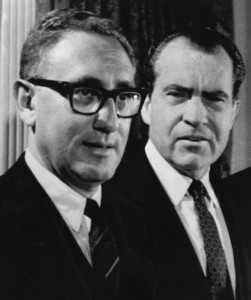 Now that the Cold War is over and we’re scared shitless by people who don’t speak Russian, it would seem enough time has passed to sit back and enjoy a laugh about just how crazy the world was in ‘dem bad ol’ days. There will never be another Nixon, and yet that bumbling idiot seems to have provided a wellspring of comic material four decades on. Look no further than the newly revealed transcripts of the infamous tapes that got his ass booted from the White House:

“What it is, is it’s the insecurity,” he said. “It’s the latent insecurity. Most Jewish people are insecure. And that’s why they have to prove things.”

Nailed it! We are insecure! You know why? Maybe it has something to do with the President dicking around, watching football while the world crumbles around his feet, talking about how insecure we are. We certainly do have things to prove, like the theory of relativity, but Dick Milhouse was only reacting to the times. These were the days of Portnoy, of Lenny Bruce; how could he not pick up on our neuroses? Also, wouldn’t you be a bit insecure if the leader of the not-so-free world was counting you by the body-bag, or lack thereof?

“I didn’t notice many Jewish names coming back from Vietnam on any of those lists; I don’t know how the hell they avoid it,” he said, adding: “If you look at the Canadian-Swedish contingent, they were very disproportionately Jewish. The deserters.”

Downright un-American they were. Those asshole deserters sought refuge up north to eat water-bagels and have their descendants run Heeb. Of course, nothing comes close to the nigh-literal bombshell Nixon’s number one Yid offered up on the uncovered tapes. After meeting Golda Meir, who implored the administration to support the free emigration of Jews from the USSR, Henry Kissinger said this:

“I know,” Nixon responded. “We can’t blow up the world because of it.”

Kissinger was such an insecure, overachieving Jew that he would rather gas his own people than be branded a sympathizer. In the end, he was perhaps the most neurotic of us all. No wonder Nixon thought we were all a bunch of nutcases. Of course, there were things he was willing to blow up the world for, but saving Jews wasn’t one of them. Who needs another nudnik, he must have thought.