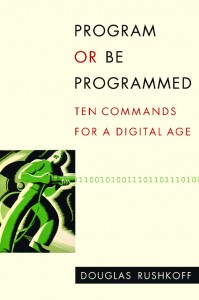 More than merely provocative, Douglas Rushkoff’s Program or be Programmed: Ten Commands for a Digital Age is a slap upside the punim. Both manifesto and manual, its chapters empower readers with ten commands for retaining control of human life while programmed technology covertly vies for the driver’s seat. Rushkoff details how our experience of reality is shaped by biases built into programmed environments – from the Internet to urban planning to the currency we exchange—the world we live in is embedded with biases encouraging behaviors that (surprise!) benefit their designers.

This may be a daunting proposition to those of us who struggle to program even our VCRs, but Rushkoff isn’t pussyfooting around; “Program or be Programmed,” he exhorts with the urgency and authority of someone in the know. Rushkoff gained notoriety in the 90s as one of the first advocates to give cyber-culture a voice. Today, he’s fighting for its soul. Armed with the street-cred of a cyberpunk, intellectual know-how of a media theorist, and spiritual perspective of a Judean scholar, Rushkoff rises to the challenge. As the biblical analogy implied in the subhead Ten Commands for a Digital Age makes plain, his long-held convictions are rooted in ideological grounds that far precede the digital age—and just might survive it. But I’ll let him explain. 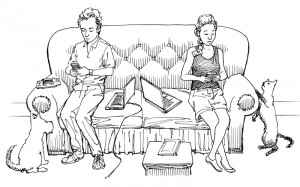 This is for Heeb so I’m going to take a pretty Jewy angle for this interview.

These ten commands are a wink to the other big Ten Commandments.

Very modest of you.

But I’m updating them as commands rather than commandments. Commandments are things that God or Moses gave to people that we’re supposed to follow. I’m not commanding readers; I’m giving readers commands that they can use.

So it’s about empowerment.

Yeah! The idea is that in the 10th or 11th century BC, we got the invention of text, which changed the way we were going to do everything. It required a new ethical template. The rules in Torah are there to help people contend with the Axial Age. We’re not going to be Bedouins in a little tribe, walkin’ around anymore. We’re going to be farmers, write contracts, communicate across long distances, and do all this other stuff. The Ten Commandments was a way to say, “How do we take advantage of these advances instead of just succumbing to them and becoming an evil, contractual, money-grubbing, long-distance, desensitized civilization?”

What does this have to do with the notion of programming?

I think programming is the biggest communication invention since text—which means we need to ask the same question: “What are the ways we’re going to use this to our own ends, rather than be used by it?” 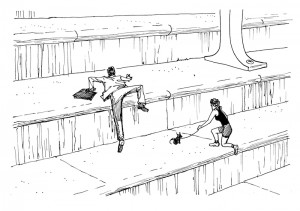 Do you assume and accept that most people won’t learn how to program, or do you genuinely want everyone to?

I genuinely want people to at least understand what programming is. So it’s like, maybe you’re deciding you don’t want to learn to read and write, but you’re at least going to understand what reading and writing is, and that by choosing not to participate in it, you’re deciding not to have an impact on the reality we’re all living in. The difference between a kid who’s programming Facebook and a kid who’s using Facebook is a pretty extreme one.

Do you think mastering programming language is in continuity with Jewishness, given it’s a culture, a society and a religion rooted in literacy?

It depends on what you mean by “program”. I don’t think that everyone’s path to understanding programming is the computer. There’s social programming, there’s all sorts of programming.

I’m starting with the computer because that’s the easiest way to see it. For me, spending time in programmed environments on computers made me understand that the rest of the world was programmed. If you understand that people are making decisions about the ways in which you live, then you get that you’re living in their world. The opportunity here isn’t just to learn how to program, but it’s to become an active aware participant in engineering reality. Which is what Judaism is about. That’s the insight of it.

In your introduction, you write that “political organizers who believe the Internet would consolidate their constituencies find that net petitions and self-referential blogging now serve as substitutes for action.” Given Jews’ commitment to social justice, do we have a special obligation to understand programs that could be used—or misused—as political tools?

We should have. But I’ve given up on Judaism’s ability to connect with this sensibility in my lifetime.

Because they don’t want to.

So you see today’s Judaism as disconnected with–

With the bigger idea. With genuinely understanding the world and shaping it. I want people to see Judaism not as a thing to protect but as a process—an intellectually engaging and socially relevant process. So that rather than taking all this money to try and get Jews to marry other Jews or try to convince people, “Don’t leave this thing,” why don’t we just invite Jews to use their Judaism as the fuel and intellectual and social foundation for what they do? In an ideal world, it would’ve been people going, “Oh, you know, this inkling I have to do this social-justice project or push through this intellectual boundary is actually supported by 3,000 years of my heritage. This is who I am!” So all of the sudden, Torah becomes relevant and alive. That’s better than merely cool.

People should realize that what they’ve been calling their lapsedness is actually continuity. That their reinterpretation of what it means to be a Jew is not distancing themselves from the harder Judaism. It’s actually a version of hard Judaism—just a complete recontextualization. It’s your obligation not to simply or blindly or, worse, ironically do your father’s Judaism. The continuity of Judaism is the discussion. It is the argument.

What about those Jews who are attaining these new media literacies? Are they carrying on the Jewish tradition under another name?

Yeah. Some of them. Guys like Larry Lessig in the open-source tradition. They’re out there really trying to figure this stuff out. For me, my ability to do that has been informed and spiritually inspired by Judaism.

But by your own reasoning, couldn’t this media shift endanger the future of Judaism—at least as a cultural sensibility?

No! I think Jews will survive it. They have systems that can transcend post-modernism, that can survive what new agers might call the shift from Age of Pisces into the Age of Aquarius. 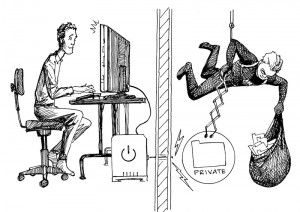 What is unique to Judaism that gives it this resilience?

It’s that Judaism isn’t about beliefs; it’s about processes. The thing to be committed to is the process. This is the greatest opportunity in a few thousand years for Judaism to have a genuine renaissance. Not a fake, marketed renaissance, but a genuine renaissance as we move into the digital age of programs.

I’ve been trying to apply the same insight to a bunch of different things—to business, to economics, to Judaism. I was basically trying to say that this new media insight that I’ve been having and getting famous for over the past decade is actually informed by Judaism. And Judaism should not only get the credit for it, but Judaism should get the benefit of its own insight.

I see that insight being employed throughout the world, from participatory democracy to the Internet, and meanwhile I see Judaism internalizing the worst of “goy culture”, trying to be cool and competitive and establish a nation: “We’re going to be like everyone else!” And it’s like, ugh, you don’t get it. You’re finally free to be yourselves. That liminal place is the actual human condition, this constantly evolving fluid. And that’s the whole thing. You get a guiding set of principles, and you can be alive! You get to be alive rather than dead, you get to be moving rather than stuck, you get to be fluid rather than concrete. That’s why your letters are fire rather than stone. And instead they take the freedom that they finally have and use it to become an institution. To end.

Now the next great thing comes along that allows us not only to lay out the program by which human beings are going to live—the law—now we have the ability to actually create programs that will live themselves. Now we can actually build a world that does not just house us, but builds itself according to our plan. So by writing ten commands, a digital analogy to the Ten Commandments, I’m hoping in some sense to reify the essential Jewish insight in a cyber context.

Really, all this time I’ve been writing one book: There’s an opportunity here.