Learn and Live is an actual organization which prevents “the exploitation of Jewish girls in Israel through intervention and empowerment,” and, according to some supporters, is  “saving Jewish souls and lives in many varied ways.” Below is one of their ads. 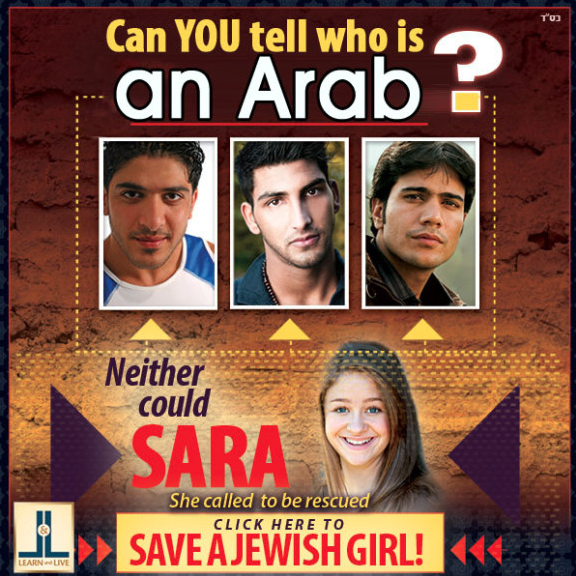 My heart goes out to Sara – the Jewess pictured above -who clearly is in need of saving. What follows is my best guess at what her desperate cry for help might actually look like.

I have definitely found myself in a kosher pickul. Well, not actually so kosher, which is the problem, haha. U see, 3 different tan-skinned male models have all given me their digits, & I don’t know who to choose! :p I have heard that you help educate young women like myself (Jewish and white, obv) about dangerous vs. healthy relationships. Obviously, I know enough 2 know that Jews r good & Arabs r bad, but like, it’s so hard to tell who is a Jew and who is an Arab! (Short of asking 2 see whether their “wieners” are “kosher,” but I’m a good girl and I don’t do that until the third date. ;) All these guys told me they love Israeli gurls, so I guess that means they’re all Jews, tho still, I’m having trouble picking, b/c they’re all so nyce (aka HOTTIES amirite?) I’m trying to be responsibl tho so I’m ranking all of them. I’d luv to kno what u think, so pls read what i have & tell me what u think! Here’s my notes:

Ability To Grow a Unibrow: 8

Ability to Abduct My Heart: 7

Herschel is the boi next door. U can tell, b/c he’s sexy, without being intimidating. Also, cuz he actually smiles. He wears blue & white, so I’m guessing he’s a supporter of Israel, but I dunno, maybe he just wants ME to think he is ? :-0?! He’s also really poetic. When we met he told me, “You’re so hot, your skin is as white as the great oppressors of the European Union.” OMG so sweet, right?!

Ability To Grow a Unibrow: 1

Avi’s agent says has the right look for reality television. \ :D / I agree!  Like, I could just imagine him without his shirt wrestling a another hunk in order to win $500,000 so he could buy us an apartment on the Tel Aviv shoreline. But even after the show I’d make him walk around with his shirt off all the time. ;) He’s not all looks, tho. He’s also fun & funnny. Here’s a joke he told me: “What’s brown and white and red all over? My grandfather’s bearded face after the soldiers were finished interrogating him.” LOL

Ability To Grow a Unibrow: 1.5

Ishmael is most def the smartest of these guys. He’s always using big words like “apartheid” & “ethnic cleansing” & getting into arguments w/ other smart ppl about stuff I don’t understand. He says my blu eyes remind him of the colour of the Sea of Galilee before it ran red w/ the blood of his people. Awwwwww. He’s like a regular Shkspere! <3 <3

So you can see why this is sooo hard! I so wanna be with the rite guy here, so help me out!