Letter From the J Street Conference

I’m in Washington, DC for the fifth national J Street conference. J Street is an alternative to AIPAC, so it’s a pretty major deal. Well, maybe not major enough to be in the Conference of President of Major Jewish Organizations. But it’s still an important organization none the less, and like Israel herself, surely just needs better hasbara. Though let’s face it, with Bibi in power, J Street is more like j/k Street.

The massive student presence means management serves dessert in the evening instead of alcohol. Just what I need after an endless day of networking…a fucking cookie. But I have to give the Open Hillel students credit. Even without booze, they know how to party.

Anyway, I was expecting to find a bunch of radical self-haters, but mostly haven’t seen ’em, except for that Eli Valley guy. Instead, the place is packed with liberal Zionists who talk about Israel too much.  And there’s a lot of power brokers. The latter were hard to get to, but once they found out I was with Heeb, they rushed to pose with me. 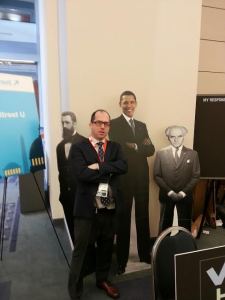