LA Clippers Owner Donald Sterling: “You Go To Israel, The Blacks Are Just Treated Like Dogs.” 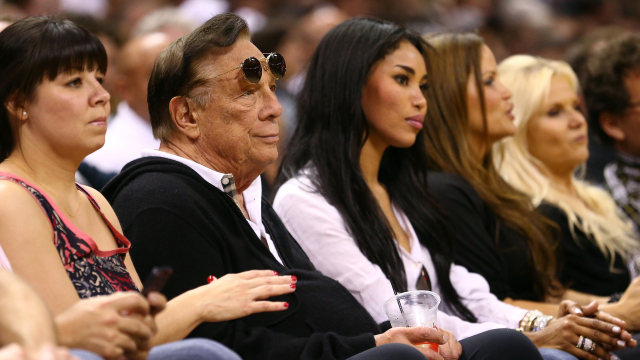 Today, Deadspin, Gawker’s Sports and Athletics site, posted excerpts from a longer recording of Sterling during which he (in an apparent effort to appear more racially sensitive?) compares his racism to the (abysmal) differential treatment of black and white Jews in Israel. He then  doubles down on being a bigoted dingbat who can’t see any connection between the Holocaust, and people of immense power discriminating based solely on race.

DS: It’s the world! You go to Israel, the blacks are just treated like dogs.

V: So do you have to treat them like that too?

DS: The white Jews, there’s white Jews and black Jews, do you understand?

V: And are the black Jews less than the white Jews?

V: And is that right?

DS: It isn’t a question—we don’t evaluate what’s right and wrong, we live in a society. We live in a culture. We have to live within that culture.

V: But shouldn’t we take a stand for what’s wrong? And be the change and the difference?

DS: I don’t want to change the culture, because I can’t. It’s too big and too [unknown].

V: But you can change yourself.

V: It’s like saying, “Let’s just persecute and kill all of the Jews.”

V: Isn’t it wrong? Wasn’t it wrong then? With the Holocaust? And you’re Jewish, you understand discrimination.

DS: There’s no racism here. If you don’t want to be… walking… into a basketball game with a certain… person, is that racism?

People throughout the sports world – and pretty much anyone with a working brain everywhere else, too – were quick to label Sterling a doddering old racist who hardly deserves to attend a Clippers game, much less own the team. Many are also justifiably baffled as to why Sterling’s racism is only receiving attention now and not after similar incidents in years past.

All the big shots denouncing #DonaldSterling, where were they in 06? http://t.co/fJXS3a0tni In 09? http://t.co/AfkQos2TlA. Late to the game.

Still, there’s something particularly odious about this instance of Sterling’s bigotry – expressed while chewing out his mixed-heritage girlfriend – and the fact that he hides behind his Judaism to justify it. It’s the whiplash-inducing combination of bare-bones racism and “who, me?” hypocrisy that’s truly remarkable. Yes, you, you octogenarian fuck. You’re the racist. Do everyone a favor – give the Clippers to someone who deserves it, and never open your mouth again.

Marge Schott is saving you an owner’s box seat in hell.