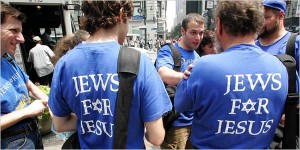 The founder of  Judaism’s second most infamous sect — the Black Hebrew Israelites take that top spot — died on Wednesday, leaving some with a guilty sense of relief. Though an old man’s passing from prostate cancer is never cause for celebration, left-wing Jews, historically willing to defend anything — Communism, Satanism, Polygamy — were transformed into flesh-hungry, murderous beasts when confronted with Rosen’s freaky Christian/Jewish hybrid religion. Pushed to their liberal limits, suburban moms tore down posters, old grandmother spit after saying the words. “Spiritual genocide,” they, and others, said. The man occupied a small but ferocious place in the Jewish psyche: He was a cultist lunatic to some, traitor to others and the ultimate “wild card” in the game Jew/Not a Jew, but mostly his organization was a niggling source of embarrassment which made every Jew wonder, “Why can’t they just be Christians, dammit!”

Born Orthodox, Rosen inspired his small army of religious freaks to hand out pamphlets and generally irritate the hell out of passerbys. And though he believed Christ was the savior (rather than just another smart Jewboy with a few good ideas and a talent for PR), he refused to let go of his cultural identity: “You can say I’m a nuisance, a Christian, out of step with the Jewish community, but you can’t say I’m not a Jew.”

You make have been a prostelytizing nut, Rosen, but pissing off such an enormous number of Jews is definitely an achievement of some kind. RIP

To find out more about Moishe Rosen’s legacy, you can visit the Jews for Jesus website.