[WARNING: this article contains what some of you might consider spoilers for Iliza’s Freezing Hot Netflix Special]

Comedian Iliza Shlesinger knows exactly what she wants and exactly what she doesn’t. “I hate being asked what it was like to win Last Comic Standing.  That was in 2008 — no one cares about that anymore,” Shlesinger tells me, “But you can ask me about my dog, Blanche.”

We’re chatting over Skype, where she lies on her bed in her apartment in Los Angeles, CA, playing with Blanche, a quiet, fluffy brown dog that accompanies her almost everywhere she goes, even on stage. Despite her wry, almost-constant half-smile, her brow is furrowed but bated, diplomatic.  Shlesinger’s frustration, if barely perceptible, is justified; her Last Comic Standing title an assignation for an up-and-comer, one that she tore off long ago, burying it beneath success after subsequent success.  At 31, her career has skyrocketed since Shlesinger’s touchstone stint on NBC’s reality talent show, where she was the first (and to this day, only) female comic to take home the win.  Since then, she’s released two comedy specials (the latter, 2013’s War Paint, is available on Netflix), hosted Excused, a reality dating show on MTV, and toured with the USO, making stops in Qatar and Afghanistan, a mere few highlights of her myriad triumphs.  With the highly-anticipated release of her latest special, Iliza Shlesinger: Freezing Hot, premiering January 23rd on Netflix and available via on demand streaming, it’s clear that Shlesinger is ready to cannonball into the next phase of her career.  Nix that: stride in and own it.

When describing her brand of observational comedy (“aggressive in content and in actuality”), Shlesinger credits her adroitness and voracious, goal-oriented ambition.  At an early age, it even manifested in her way of speaking.  “I’ve always talked very fast,” she says, “any play or show I’ve ever done, anything, it’s been like, ‘Iliza, slow down!’”  As an adult, she uses these hallmarks to take her favorite subject matter to task: at its most elementary, how men and women relate to one another. “For me, it’s just letting everyone know we’re all equally crazy,” she explains, “but we’re all doing the best that we can.” 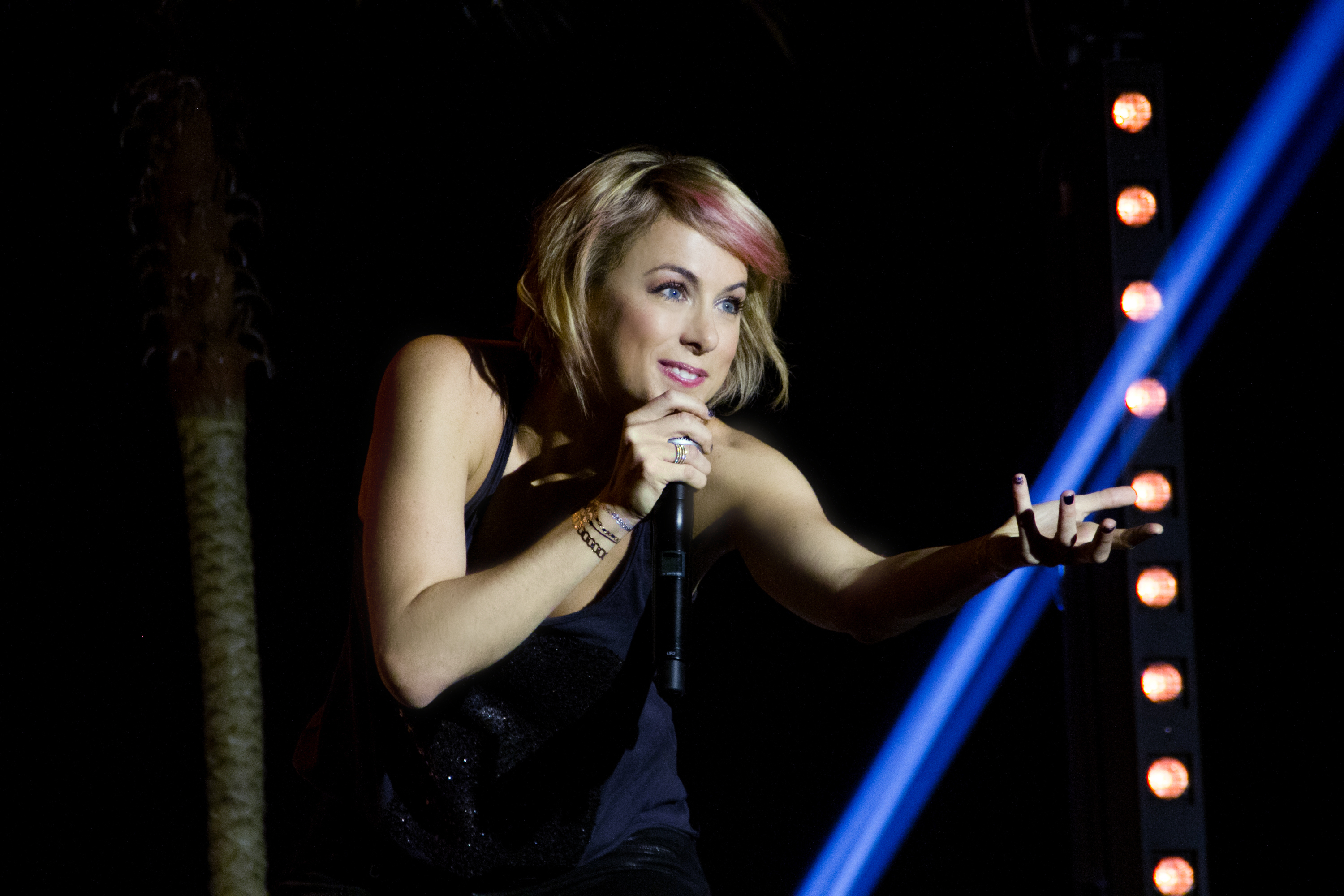 Iliza in her element (via Netflix)

While these generalities can sometimes turn into heteronormative blanket statements or gender archetypes (“girls are like [this]” and “guys are like [this]” are common phrases during her sets), Shlesinger’s manic delivery, penchant for physical comedy, and innate gift for riffing on the precise details that make an experience unique, transform her act into a series of riotous narratives that cut to a sense of truth.  She segues into outlandish characters with a comedy veteran’s deceptive ease within seconds, the more fantastical the better; her arsenal includes a smoke-huffing, lava-spewing one-night stand who turns out to be Satan, a soon-to-be-wed Shlesinger alter-ego who is equally addicted to Pinterest as she is to cocaine, and the gurgling, table-dancing, inebriated proverbial devil on her shoulder she calls her “party goblin.”  Her ability to tap into human insecurities through these characters — like the sharp pain of rejection from someone you hardly know, or the freedom of wild abandon and the eventual  consequences it can usher in — is undeniably remarkable, and in rare moments eschews gender politics entirely.

Many of these personas resulted from the cartoons and sketch comedy Shlesinger watched on television while growing up in Dallas, TX (“Kids in the Hall, In Living Color, The State,” she readily lists), all of which contributed to her predilection for madcap caricature. Even though Shlesinger used to cite comedians like Ellen Degeneres and Paula Poundstone as influences, they served more as monoliths of inspiration rather than. “I used to give those answers just because I always thought I had to give answers about stand-up comics. The real honest-to-G-d answer is that I’ve only went to one Ellen concert, I’ve never seen Paula Poundstone live, and I never bought any of their DVDs.  I loved them because their comedy was about being a person, not about being a girl,” she states, referencing the sense of universality she infuses with her own subject matter.

Raised in a Reform Jewish household, Shlesinger is the first to proclaim that while her heritage is not a central locus in her artistic endeavors, it certain informs her perspective: “There’s a lot of guilt and a lot of self-deprecation [in Jewish culture] — and I think that’s why there are so many Jewish comics, because of the ability in our religion to question things. […] Comedy comes out of struggle, and I don’t think anyone’s struggled more than us.  It trickles down and translates.  If you look at certain [groups of] people and their history, it comes out in their art.”

The most prevalent part of her insight, of course, comes from the autobiographical. Shlesinger’s tales in Freezing Hot depict a newly-inducted thirty-something who grapples with desires slated towards the raging, party-hardy lifestyle her career has afforded her, while creating a space for herself in the “more-settled” world of her peers.  A date Shlesinger has with an accountant, for example — wherein her girlfriends insist that she wears a silk blouse because it’s “age appropriate” and she contorts her body into grotesque poses to mimic the constricting nature of “dating attire” — becomes the framework for the set of anxieties that coincide with her occupation of that liminal zone.  “Am I thirty-one and do I like to party?  Yeah.  Am I okay with that?  Sure. I still have a mortgage and take care of the dog — I’m not a total animal,” she clarifies while laughing.

“Ninety-nine percent of what I perform has happened,” states Shlesinger, “it’s exacerbated and exaggerated — I’m obviously not grabbing my vagina in public and doing gross things — but everything comes from a real place.  I think that’s why girls relate to it, because it’s so authentic.”

When asked if she’s witnessed a sea change regarding female comics in her industry, Shlesinger relies on the personal, evading the role of a generational delegate.  “I like to think that when I did Last Comic Standing…I was always very unapologetic and unabashed about my comedy, and I never really had a template, or anyone I ever looked up to specifically, so I never knew if what I was doing was right or wrong. It was just funny, and talking.”

With an almost startling nonchalance, she then recounts a litany of anecdotes from her earlier years: a male fan somehow sneaking into her green room before a show, only to call her a “dirty Jew”; various instances wherein audience members attempted to replace her water with beer (“as if I wouldn’t notice?”), one of which she is certain was a roofied shot; or making an appearance on a morning radio show, only to face down “a DJ who obviously hates women, hates that you’re funny, hates that you do what he can’t do for a living, and they let you know it.”

Despite this, Shlesinger maintains that comedy and craft are what determine the true victors of her field.   “I think people are a lot more open to funny women now.  The only downside is that people will literally take any girl that can tell any joke and they’ll be like, ‘Oh, you’re on Vine, here’s a show!’  Relax! [But] I’m glad it’s becoming ‘funny comedian,’ not, ‘funny female comedian’ — because that’s stupid.”

As the minutes dwindle until the debut of Freezing Hot, the question looms as to whether Shlesinger will make another leap: from a funny comedian to an indomitable one.  War Paint has not made her a stranger to Netflix, but Freezing Hot’s hype, paired with her new project, the currently-in-development Forever 31 — scripted comedy helmed by Shlesinger and supervised by Sex and the City alum Cindy Chupakl — have fixed her on yet another precipice, and a chance to either careen or climb.  As she scratches Blanche’s belly and nuzzles her fur, Shlesinger’s equilibrium is a thrill unto itself.  “For the first time, I’m part of ‘the cool list,’” she says. 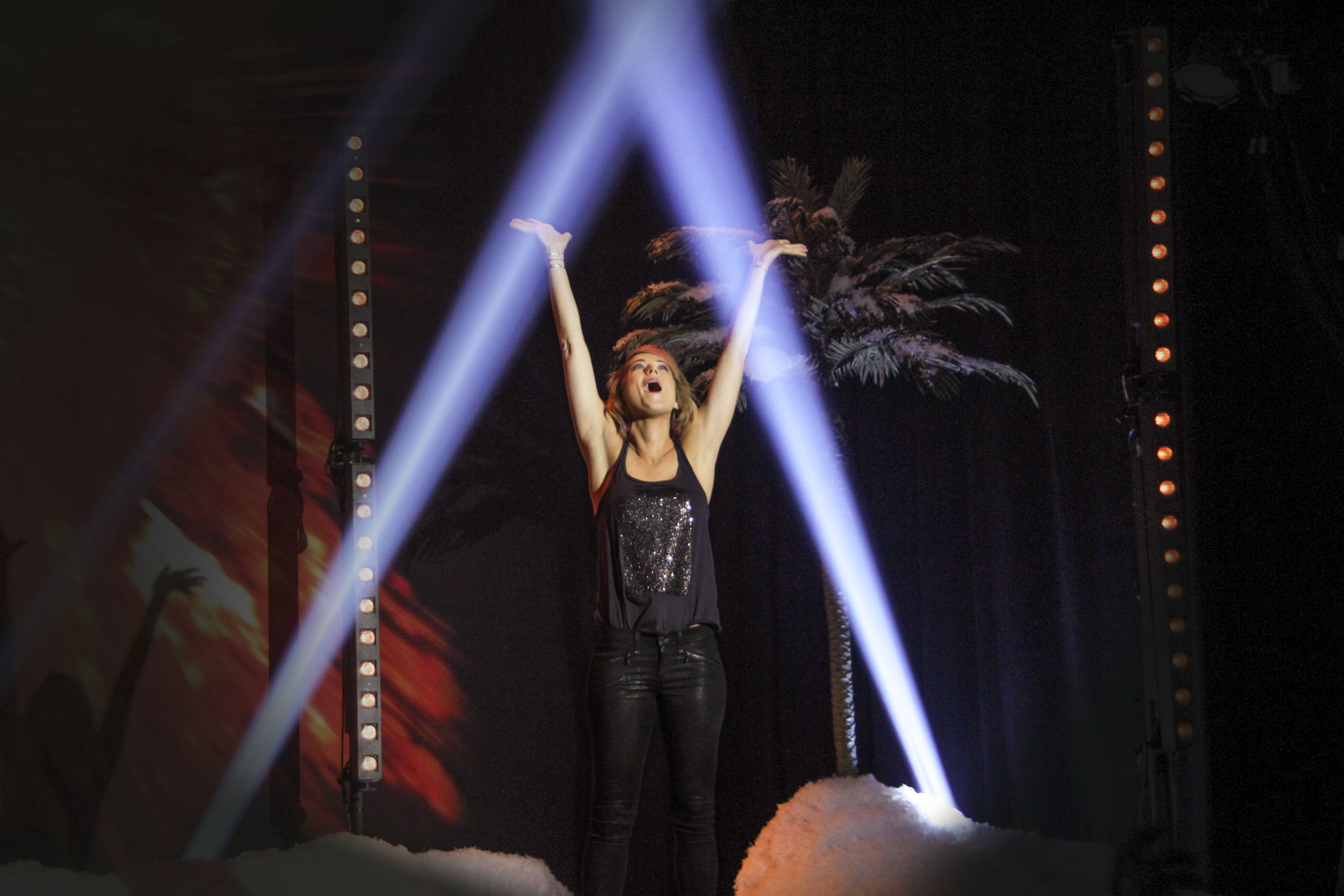