It Looks Like a Turtleneck: Jewish Summer Camp Mafia 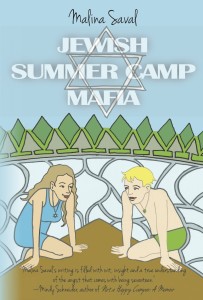 Malina Saval was with Heeb in its early days, writing reviews and feature articles two tables over from me and my (still-unfinished!) manuscript at the Novel Cafe in Venice, CA. (Like pretty much everyone else in the place, she was also a screenwriter.) That was 2005; nowadays you can find her in the archives of too many major publications to list and in three different sections of the bookstore, including How To. Like her non-fiction The Secret Lives of Boys: Inside the Raw Emotional World of Male Teens, Jewish Summer Camp Mafia examines those hormonally-fraught years before you can legally drink. Instead of interviews with real boys, though, Saval’s debut novel dishes up the alliteratively-branded Mushky Malka Mendelssohn, a Jewish every-girl who goes away for the summer and falls for the lone goy in her midst. Her first encounter with a “turtleneck” is pitch-perfect neurotic–see below. Jewish Summer Camp Mafia will be on the Y.A. shelves, but for those of us whose Bar/Bat Mitzvahs are ancient news it belongs under Nostalgia. (Besides, how old were you when you read Harry Potter?)–Judith Basya 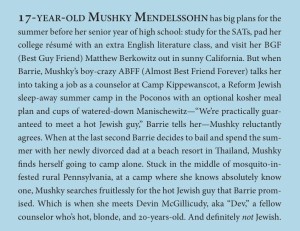 The relationship got serious.

Forced to keep our relationship under wraps, Dev and I resorted to secret rendezvous at night down by the lake where he’d slide off my bra; in the athletic shed behind the baseball diamond where he’d go to second base on me; and in the kitchen behind the pantry where we did Whip-its and raided the refrigerator marked KOSHER, gorging ourselves on potato knishes and Ba-Tempte half-sour pickles.

It didn’t matter anymore that Dev wasn’t Jewish. Or that he had a bra on his car. Or that his mother had Jesus figurines above her bed and wore a horrible-looking housecoat. Or that when he pronounced my middle name—“Maaaalka”—he sounded like a Scandinavian tourist. A wave of excitement coursed through me every time he dug his hand underneath my t-shirt and went to unhook my bra.

So what if I had to bribe my campers with copies of Teen Cosmo and Teen People that I bought at the Circle K on nights off to keep them from snitching on me whenever I sneaked out of the bunk?  (Ro’ never had to submit to such measures; she seemed to come and go as she pleased, leaving a trail of cigarette smoke in the wake of her designer Grecian sandals as she padded down to the lake.)

And then one night we didn’t have to sneak around.

“Our first night off together,” Dev said. “Finally.” We pulled into the parking lot of the Holiday Inn in Mt. Pocono. It was short and square with its signature aquamarine and orange signage. “Counselors night off. No annoying campers. No stupid camp directors. Just us. You and Me. Nobody can tell us what to do.” He took my hand and squeezed it.

We glided through the hotel’s sliding glass doors. The lobby furniture was orange and the shag carpeting was green. Perched on the wood-paneled check-in desk was a plastic display case featuring an assortment of tourism pamphlets for the Pocono Blues Festival and Claws ‘N Paws Wild Animal Park. There was free coffee and free continental breakfast and a TV room with six working channels. Dev slid his Emerson Visa credit card across the counter, tapping his fingers on the counter (“God, I hope it goes through,” he said under his breath). The hotel check-in clerk handed him a jangling set of scratched silver keys hanging from a clear plastic rectangle with the words HOLIDAY INN etched in white.

“Are you nervous?” asked Dev.

We took the elevator five flights up. We passed an ice machine, a vending machine, a cart of toiletries and a utilities closet propped open and mint green folded towels on its shelves. We came to our room: 613. There were 613 Commandments in the Torah. It was a sign. Dev kicked open the door.

“You know,” he said. “We can take things slow. We don’t have to do anything that you’re not ready to do. We can wait as long as you need.”

I glanced across the queen-size bed with its quilted brown and burnt sienna bedspread. We didn’t have to do anything that I wasn’t ready to do, but I was ready to do things that I wanted.

“I know,” he said, drawing a hand across my cheek. “But, you know, you said your first time wasn’t—”

Dev was a college boy. He knew what he was doing. He drew the blinds closed and lowered me onto the bed. He knelt down in front of me. He took off his ZBT hat and placed it on the floor.  He slid off my socks and my sneakers and my shorts and my underpants. I don’t remember what color underpants I was wearing that day, or what color shorts, but I remember them lying on a heap on the floor. He firmly spread my legs apart and lowered his head between them. I felt slow rising waves in the lower half of my body and then a sharp rush of sadness. The room felt dark and cold, even though it was July and eighty-five degrees outside. Everything inside me went slack. I wanted to be held and not so naked.

“Really? You mean not with—”

“Wow,” said Dev. He slipped into bed next to me and spread a cool sheet on top of us.

“We don’t have to do anything else,” he said, playing with the knots in my hair. “We can wait.”

And there it was, in the palm of my hand. I shirked, tilted my head, unsure what to make of it. I examined it closely. I’d only slept with one boy so I wasn’t exactly a sex-pert, but there was something slightly off about Dev’s private parts.

And then, just as I was about to lower my mouth on my first Gentile penis, Dev’s iPhone rang.

“It’s my mother,” he groused, springing from the bed. He grabbed his phone and headed for the bathroom. “I’ll be right back,” he said and closed the door behind him. He was gone less than a minute, but in that minute a wedge of melancholy grew between the queen-sized bed with its bad floral bedding and the bathroom with Dev inside it. My phone hadn’t rung since I got to camp. My parents hadn’t even called when my cousin died, ringing the main camp line instead. I was alone, naked, on a bed in a lousy Holiday Inn hotel room.

Dev emerged from the bathroom. “I’m so sorry,” he said, climbing back into bed. “She gets really, really needy. It’s hard for her all on her own.”

“You are literally the coolestgirl that I have ever met in my whole entire life.”

“What am I not getting?”

Our campers sang about us at mealtime:

Sitting in a tree

Then comes baby in the baby carriage!

We became a joke in the annual camp counselor review. We were a more gossiped about couple than anybody in Us Weekly or People. Forbidden from touching in public, we exchanged winks, waves and smiles.  Dev mouthed, “I love you” across the dock during the all-camp Shabbat free swim. Samantha loaned me her red string bikini —“It’ll look so awesome on you!”— and it fit too-tight and too-small in all the right places. I loved her for saying so, even if my ass was twice the size of hers. Dev whistled as I walked by. There was nothing that UG could do to stop us.

Reed, the Red Cross-certified sailing instructor—dubbed Guitar Guy because he sat under a tree during free period composing bad rhymes while strumming the three chords to the guitar that he knew—composed a special song tribute about us:

Dev and Mushky, they are in love

That even if one is a city girl big-assed Jew

And the other is an Irish lad from outside of Syracuse

That love can conquer, yes it can

For the first time in a long time, I was happy. I was falling in love. I was skipping across camp in my scuffed-up sneakers and cut-offs. I canoed around the sun-dappled lake with Samantha and Erika during free period saying things like “I love camp!” and “I love being a counselor!” and “Camp Kippewanscot rules!” During snack period, Dev and I would meet up on the lawn outside the dining hall and suck on frozen Otter Pops while our campers encircled us aiming water guns at our faces chanting, “Mushy and Dev! Mushky and Dev!”

I wasn’t worried about the SAT exam or college applications or padding my résumé with extra curricular activities that I hated for the sake of impressing the admissions committee at Yale. I didn’t even care about religion anymore. Counselors were penning ridiculously bad songs about me and I thought it was the most awesome thing ever. Camp was awesome! Life was awesome!

We took arts and crafts activities to a whole new level, painting push pots together in ceramics, MUSHKY and DEV etched in hard baked clay. We passed love notes to one another during evening activity.  We sat on the edge of the dock as our campers disrobed during Swim Safety Day, dipping our feet in the thick, murky water and naming our unborn children.

And then one late night, long after Taps and tucking in my campers with promises of Twizzlers and fake tattoos if they kept their mouth shut (Margot wanted a skull & bones; Samantha, a puffy heart), a balmy summer breeze tickling the leaves and the sound of soft lake ripples, I found myself on my back on a soft bed of moss wearing only my underwear and Dev moving breathlessly on top of me.

I reached up to grab the back of his neck and noticed that it was smooth where before my hand had pressed against a silver chain that left circular indentations in the fleshy part of my palm.

“What happened to your Claddaugh necklace?” I asked him.

“Of what?” I asked nervously.

Six sexiest words spoken by a Gentile boy as he lay naked on top of you.

“I’ll wear red. And green. Together.”

And just like that, on a bed of moss and the glint of moonlight on Dev’s sweaty pale skin and Lake Kippewanscot lapping quietly at the shore, I let a Gentile boy inside of me.