I’ll Have A Quarter-Pounder With Cheese (Hold The Swastika)

A few days ago, in reference to a Malaysian effort to boycott McDonalds over the misguided belief that the fast food giant was channeling funds directly to Israel during the current war with Hamas in the Gaza Strip, I rattled off a list of totally valid reasons to avoid Micky D’s.

This is what I wrote:

…there are plenty of reasons to avoid McDonald’s: The Big Mac tastes like a plasticine facsimile of a real hamburger, they have a truly horrifying menagerie of corporate mascots, and they always forget to give me ketchup with my fries at the drive-through. All completely valid. But global war profiteering? That’s a super-sized crock.

It appears, though, that I missed one whopping (whopper?) reason to steer clear of Ronald and his ilk.

This past week, at a McDonald’s in Morehead City, NC, customer Charleigh Matice had opened her chicken sandwich to apply a dollop of mayonnaise only find an actual, no-kidding swastika “etched in butter” on the underside of the bun. 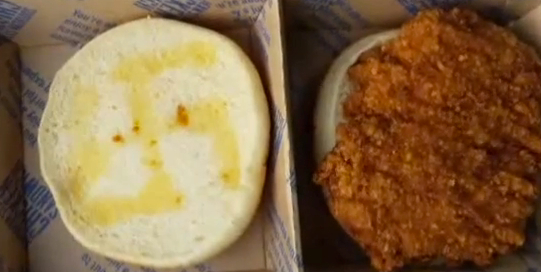 Yes, some minimum-wage Nazi was so determined to strike a blow on behalf their racist ideology, that they screwed up their courage, took a deep breath, and draw a swastika… With butter!

Matice, herself the granddaughter of a WWII vet, told local ABC affiliate WCTI that she was offered a replacement sandwich, but:

To their credit, the McDonald’s in question replied to WCTI with the following statement:

“We are very sorry for the service that our customers received, and to be clear we have terminated the employee who was involved. We do not tolerate that kind of behavior at McDonald’s, and it’s not what we stand for personally as owners. It is about providing the best level of service and care to our customers, and anything less than that is unacceptable to us.”  – Dulcy Purcell, local McDonald’s Owner/Operator in Morehead City, NC

It seems that Matice isn’t holding any grudges against the fast food chain. She told WCTI she planned on returning to that McDonald’s, as she is “a loyal customer.” And while it’s nice to see a happy meal have a happy ending, I still find myself shocked and disgusted to know there are people out there who put mayonnaise on their chicken sandwiches.