Inspired by totally legitimate, not at all bogus internet allegations that the McDonald’s corporation is somehow funneling money directly into the Israeli army, a network of Malaysian internet users are urging their fellow countrymen and women to avoid the fast food giant for a day. And while there’s no real evidence, or any logical reason as to why McDonalds’s would sponsor the IDF, the company has, nonetheless, been forced to respond to the baseless accusations. Reports Marketing-Interactive:

[McDonald’s] has been struggling with the issue in Malaysia for nearly a month and has been fending off allegations that is funding Israel against the Gaza conflict. Last month it issued a statement on Facebook saying:

“We wish to reiterate that McDonald’s does NOT channel any sales, profits or franchise fees from our restaurants to support ANY political causes or conflicts in any part of the world. There is absolutely no truth in any online allegations suggesting otherwise. Our core values dictate that we operate our business ethically and to the highest standards. This is a value that we uphold with utmost conviction. In Malaysia, we are proud to be part of the local community – providing opportunities for local franchisees and careers for 12,000 Malaysians, serving our customers with passion and respect, and actively supporting meaningful causes to enhance the lives of the needy.”

That hasn’t stopped some from supporting the boycott, if not in practice, at least in spirit. Malaysia’s New Straits Times spoke with Dr Mohd Akbal Abdullah, who holds the unwieldily title of “Universiti Tun Hussein Onn Malaysia’s Faculty of Science, Technology and Human Development Centre head.”

“I support their move to call for a boycott, but I doubt its effectiveness.” “There have been calls for boycotts for years. They have never lasted long.” (Translation: “i’m lovin’ it“)

A flyer making the rounds on social media calls on Malaysians to boycott the fast food chain on August 8th. As translated by Malaysian Digest, it reads: “Boycotting McDonald’s Day!!! It starts on 8th August 2014 from 7am to 7pm and the campaign will continue until the Zionist regime in Palestine is entirely wiped out” 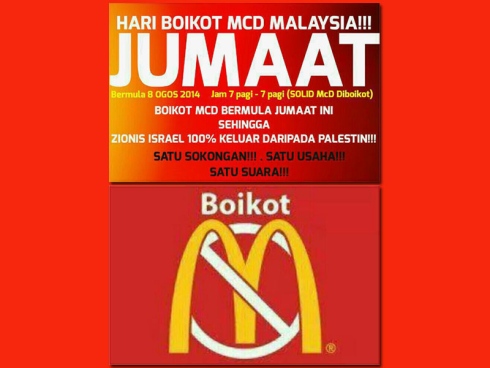 Sorry Malaysia, there are plenty of reasons to avoid McDonald’s: The Big Mac tastes like a plasticine facsimile of a real hamburger, they have a truly horrifying menagerie of corporate mascots, and they always forget to give me ketchup with my fries at the drive-through. All completely valid. But global war profiteering? That’s a super-sized crock.