Okay, maybe “insane” isn’t the right word – After all, we’re just talking about a TV set of a guy’s apartment. Still, the level of detail in this  3D Seinfeld-verse is pretty astonishing; There’s Jerry’s Superman doll on the bookshelf, and all the magazines are Seinfeld-centric issues of real publications (although, what, no Cosmo Kramer coffee table book?) 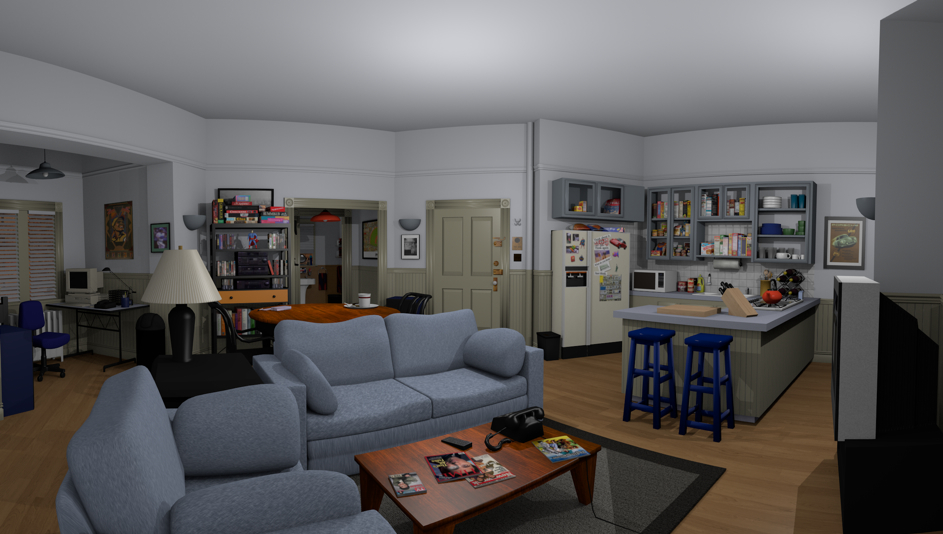 I came up with the idea of recreating Jerry’s apartment, in it’s entirety for virtual reality. Television is virtual reality in some ways. We make believe that Jerry’s place is actually a Manhattan studio and Monks Cafe is just down the street. We suspend the reality that his apartment is just a set in Hollywood, with tons of cameras and lighting dangling overhead.

But, lest you think Miller has only created a pretty picture of Seinfeld’s living room:

I started by scouring the Internet for screen shots of Jerry’s apartment but that didn’t yield much. Eventually I resorted to screen-capping streaming episodes so I could get detailed images of the various items around the set. I tried to be faithful to the shows original props and it’s era, but some things were near impossible to Google. I did a lot of research and tried to find images of the original products used in the show, and modeled around those dimensions, rather than relying solely on blurry screen shots. I found lots of good footage of the bathroom in the episode “The Barber,” during the part that Newman enters Jerry’s bathroom to find a hair sample. I feel like the main room and the bathroom are very well created, however I could only find one screen shot of Jerry’s bedroom, at the end of “The Chicken Roaster.” I used a blurry screen grab to texture the painting above his bed, and was able to recreate the bed, sheets and nightstands accurately.

In other words, this is a fully realized Seinfeldian world (albeit one limited to Jerry’s apartment. So far…) The whole thing is designed for Oculus Rift – a kickstarter backed virtual reality headset currently only available to developers, but slated for the mass consumer market in late 2014/early 2015.

Here’s a quick video showing all the layers of detail Miller put down in his living room render:

Thank you, Greg! This is nothing to yadda-yadda-yadda over.