Heeb Exclusive: Sneak Peek at SANTA CLAUS VS. THE NAZIS 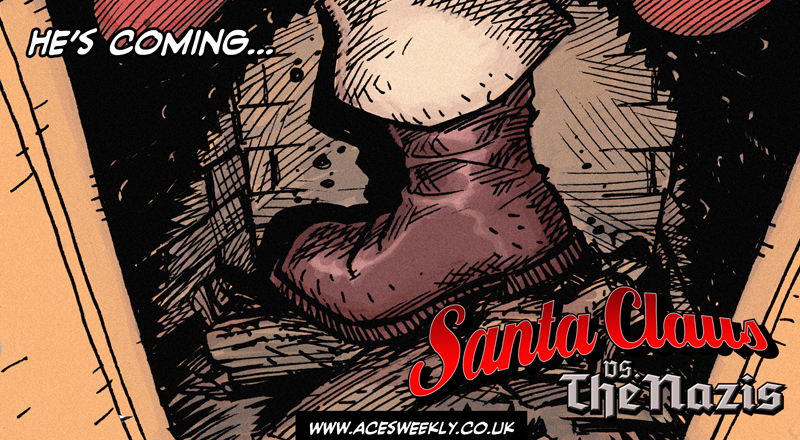 Growing up Jewish, I believed in Superman, not Santa. But after reading the first installment of a new comic, “Santa vs. The Nazis”, written by Benjamin Dickson and drawn by Gavin Mitchell, there’s a new jollier ubermensch in my dreams!

This delightful historical fiction launches today, as part of Volume 2 of Aces Weekly, a new digital-only comics magazine out of the UK, published by David Lloyd, co-creator of V for Vendetta and the man responsible for the ubiquitous mask occupying our attention. Each “issue” of Aces Weekly is 126 pages of kickass comics.

We at Heeb are big fans of Nazi’s getting pummelled so the concept is thrilling, but lucky for us all the execution (pun not necessarily intended–no spoilers here!) is even better: wondrous art, compelling story.

In American legend (and claymation classics) Santa lives in the North Pole. Where do you set Santa’s factory and homebase?

Like much of the Santa Claus legend, the details vary from place to place.  Most of the details in the story are a mishmash of UK and US elements, but the location comes from the UK and European legend.  In the story, Santa’s factory is located in Lapland, the Arctic region of Finland.  I suppose you could argue that it’s technically the North Pole as it’s well within the Arctic Circle, just not at the literal centre.  The specific location is Korvatunturi Mountain (Korvatunturi means “Ear Mountain” in Finnish, as the top of the mountain is shaped like an ear), and is where the Finns believe he lives.  The fact is, the Nazis didn’t go to the North Pole, whereas they did go to Lapland. 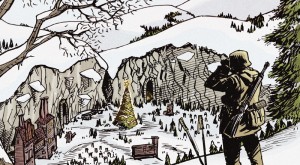 What’s the deal with Santa’s young black helper Peter.  Where does his character come from?

Peter is a character that primarily comes from the Scandinavian Santa Claus legend, known there as Zwarte Piet, or Black Pete.  He’s a mischievous, foolish black boy of about ten years old, and originally was Santa’s slave.  For obvious reasons the character was changed over time, and he became a boy that Santa had rescued from slavery.  His origin varies somewhat from country to country, but he’s an interesting character as a direct descendant of Europe’s colonial past.  In Scandinavia, it’s still normal for people to black up and play the character.

There’s no real getting away from it – the imagery associated with him is essentially racist.  Many people want him banned altogether, others argue that he’s highly traditional and so should be kept as an essential and fun part of Christmas.

I suppose my view on this is that there’s nothing wrong with having a black boy as Santa’s helper.  It’s only really the imagery you need to change (along with the habit of putting boot polish on your face).

Is it a challenge mixing history with legend?

The main inspiration for the story was the simple question “If Santa Claus is real, what did he do during the war?”  In order to really explore that question, I had to base the story in some kind of truth. The war was such an extraordinary time that it’s actually quite hard to make things up that are more extraordinary than what really happened.

The truth is that in the winter of 1939, Finland fought an extraordinary defensive campaign against an invading Russian army, known in Finland as The Winter War.  (It’s this war that the term “Molotov cocktail” comes from, incidentally.)  After successfully pushing the Russians back, Finland invited Germany to help fortify their borders, which Germany was only too happy to do.  So when the story shows German soldiers in Lapland, that is factually accurate, as is the name of the army division.  Most of the actual characters are made up though. 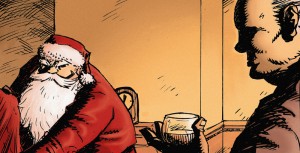 Do you think the Nazi’s would consider Santa be an example of the Aryan ideal?

The Nazis took a lot of imagery from pre-Christian civilisations, and (quite rightly) recognised that Santa actually pre-dates Christ. (Though we wouldn’t necessarily recognise him in his pre-Christian form.)  Also, despite the propaganda that was prevalent in the US during the war, Nazi Germany was still largely a Christian civilisation.  So, to my understanding at least, Santa was not seen as an Aryan ideal (he’s fat for a start), but he didn’t contradict anything, even with the more pagan-based imagery that the Nazis adopted.

In fact, Hitler really doesn’t like him much.  I won’t explain why because of spoilers, but I will say that part of the point of my story is that fascism is all-consuming.  Either it sees a use for you and consumes you, or it sees you as a threat and destroys you.  Santa Claus is not exempt from this, which he leans to his cost.

In your comic, Santa mulls over a moral quandary that often nags Superman. Any similarity between the two heroes?

I didn’t actually realize that until quite late in the writing process!  I have to confess I don’t read Superman, so it was more or less a happy accident.  But when I did clock it, I drew inspiration from Alan Moore’s Doctor Manhattan more than from any other character.  I was thinking of Santa as not so much a superhero, more of a minor deity.  But yeah, the notion that “with great power comes great responsibility” is definitely a major part of this Santa’s motivation. 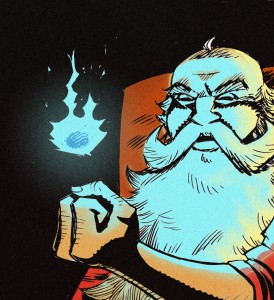