Hankering for More Greene: A Tribute to Susie 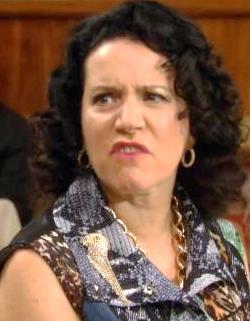 By E.J. Dickson
It’s been three months since the last episode of Curb Your Enthusiasm, and already I’m pining for Susie Greene. I miss the Gorgon-like curls, the bedazzled college sweatshirts, the peace sign hoop earrings peeking out from garish headscarves. I miss the razor-edged whine and, of course, the constant stream of invective that led the L.A. Times to dub Susie “the most lyrical purveyor of profanity on television.” But mostly, I miss Susie because I believe she is one of the few positive Jewish female characters on television today.  She is what every woman, Jewish or not, should aspire to be: loud, confrontational, overbearing, fiercely loyal, flamboyant, and relentlessly self-assured.
Known for her trademark brand of vulgarity—exhibited in choice phrases like “four-eyed fuck” and “car wash cunt”—Susie mercilessly berates anyone who offends her or subverts her view of social convention, from perpetual foil Larry and oafish husband Jeff, to snooty restaurant servers and PTSD-suffering babysitters. The character has inspired a book, Essman’s What Would Susie Say?: Bullshit Wisdom about Love, Life and Comedy, a series of YouTube mashups of her greatest tantrums, and Essman’s own stand-up act–which employs such characteristically Susie-esque invectives as, “I wouldn’t fuck you with Dr. Ruth’s pussy.”

Yet despite the character’s popularity, Susie has been criticized for adhering to the JAP archetype. Jeff Edelstein from the Trentonian wrote in a column last month, “Susie takes the Jewish-American princess stereotype and turns it into just about the scariest thing a man has ever seen.” Of Essman herself, in his book Shtick Shift: Jewish Humor in the 21st Century Rabbi Simcha Weinstein sniffs, “she’s made a lucrative career portraying a shallow, status-conscious Jewish wife. If that isn’t a cruel stereotype, what is?”

In their assessments of Susie as a stereotypical, castrating Jew bitch, these critics fail to note how complex Essman’s take is. Far from playing up to a well-worn archetype, Susie both embodies traditional Jewish female roles, and at the same time completely fucks with them. In doing so, the character both embraces and subverts convention, leaving an indelible mark on the legacy of strong Jewish women.

Take, for instance, Edelstein’s claim that Susie turns the JAP stereotype into “the scariest thing a man has ever seen.” If we compare Susie to the materialistic JAPs in Philip Roth’s novels, we find that she’s far too outspoken and antagonistic to play the role of the pampered housewife who doesn’t cook, clean, or give blow jobs other than during the High Holidays. Although it’s tempting to imagine her upbraiding Alexander Portnoy for sticking his fucking dick in the Shabbos dinner, Susie is much less like Lorraine Bracco’s fur-loving Jewish housewife character in Goodfellas than Joe Pesci’s.

Conversely, Susie doesn’t fall in line with the other quintessential Jewish female trope: the sexless, guilt-mongering Yiddishe momme. She differs from the stereotypical Jewish mother in that her weapon of choice is an acid tongue, rather than oppressive guilt: if someone cut in front of Susie in line at Loehman’s, for instance, you can be damn sure she wouldn’t keep her mouth shut about it, only to gripe about the bitch in the Tory Burch pencil skirt in the privacy of her own tastefully upholstered home. There’s also nothing neutered about Susie’s sexuality, as her penchant for spaghetti strap tops and low-rise jeans implies that she’s as convinced of her own fuckability as she is of everyone else’s being an asshole.

Susie is also unique in the show’s depiction of her Jewish identity, which she outwardly embraces throughout the series. By celebrating Shabbos, getting her daughter bat mitzvah’d and, in one episode, displaying her vast knowledge of frum women by pretending to be a Hasidic Jew, Susie wears her heritage as proudly as she sports her sparkly pink headbands. Her Jewishness is so deeply embedded in her persona that Larry even refers to her as “a way bigger Jewface than [he] is” during an argument about getting into a WASP-y country club. While this is certainly not intended as a compliment, considering how few “big Jewfaces” there are on television, it’s inspiring to see one of us take on tradition in her own outrageous, hilariously vulgar way.

Susie’s obvious Jewishness is even more refreshing when you consider how few blatantly Jewish female characters there are on television today. Although popular network series like Glee, Mad Men, and Community all feature strong Jewish female characters, being Jewish is not central to Annie Edison’s or Rachel Berry’s character the way it is for Woody Allen, or even Seth Rogen; for these women, being Jewish is either a quirky personality trait, or it marks them as a member of the eroticized other. While this isn’t necessarily a bad thing, when Natalie Portman is giving interviews about how she doesn’t want to play Jewish characters, you get the sense that the options for Jewish women in Hollywood haven’t changed much since Betty Jean Persky (aka Lauren Bacall.) The tendency to categorize Jewish women as either a) only Jewish, or b) not really very Jewish at all, is one that Susie decidedly challenges.

By embodying the same stereotypes that bedroom-haired, pouty-lipped Jewesses like Lea Michele and Mila Kunis hope to counter, it’s easy to categorize Susie as a stereotypically ethnic, unsexy frump, yet this is not how I see her at all. As a loud, abrasive Jewish woman who was raised by similarly loud, abrasive Jewish women, Susie is as comforting a reminder of my heritage as a plate of brisket. Growing up, the members of my family were all just as likely to call each other evil little cunts as they were to smother you with praise and affection; I’m always reminded of this dynamic whenever I watch Susie fly into a tantrum over Larry rejecting her offer of a house tour, only to greet him with a hug and an amiable “hey, Lar” moments later.

My mother, a Curb fan who is—like Susie—abrasive, confrontational, and very proudly Jewish, agrees with this assessment of Susie’s character, citing her loyalty to her friends and family as evidence of her generous and forgiving nature. “Even after she gets into a fight with the Davids, at the end of the day she always forgives them,” she points out. “That’s why they’re always laughing it up in the next episode, like nothing’s ever happened.” 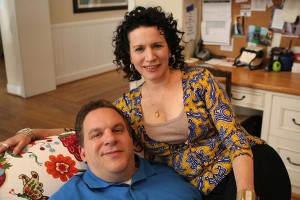 It is this quickness to forgive, and this unwillingness to hold a grudge against those who’ve slighted her, that is Susie’s most admirable—and traditionally Jewish—characteristic. Jewish law requires us to be generous in our forgiveness of those who have slighted us, and we’re reminded of Susie’s boundless capacity for forgiveness every time we see her yukking it up with the Davids at a swank Italian restaurant in Brentwood. Her “fat fuck” of a husband is, after all, still her husband; the “carwash cunt” and “four-eyed fuck” are still the dear friends that she and her husband, in one episode, even plan to be buried with (although the plan is thwarted by Larry’s refusal to be buried next to Ted Danson).

Like my mother and the dozens of other Susies I’ve known in my life, Susie Greene makes me proud to continue the legacy of loud-mouthed, abrasive, proud Jewish women, and she’s a source of inspiration for what I hope to be in the future as well. Because, with all due respect to Mila Kunis, I don’t want to pose for the cover of GQ in my panties, seductively sucking on an iced coffee straw, or flashing my Star of David tramp stamp in a Details piece called “The Rise of the Hot Jewish Girl,” to prove that I’m not a frigid JAP or a cuddly bubbie. I don’t want to care if someone who’s an even bigger Jewface than I am calls me a Jewface, or if some TV critic thinks I’m the scariest thing he’s ever seen.

Like Susie Greene, and like the dozens of women in my life who remind me of her, I want to wear what I please, make whatever noise I feel like making when taking a sip from a refreshing beverage, and use whatever four-letter word I want to use when my friends refuse to take the house tour because why wouldn’t you take the house tour, you four-eyed fuck?

EJ Dickson is a freelance writer and blogger at Nerve.com. She enjoys doing crossword puzzles and writing about the boys who rejected her in high school. A writer from the New Yorker once referred to EJ as “ineffably cool,” though she suspects it was because she was wearing skinny jeans at the time. EJ can be reached on Twitter @ej_dickson or via her blog, Portrait of the Artist as a Young JAP. She lives in Oberlin, Ohio and does a spectacular impersonation of Macy Gray.