From The Ginjew Files: “A Redhead Conference In Israel? Why the Hell Wasn’t I Invited?!” 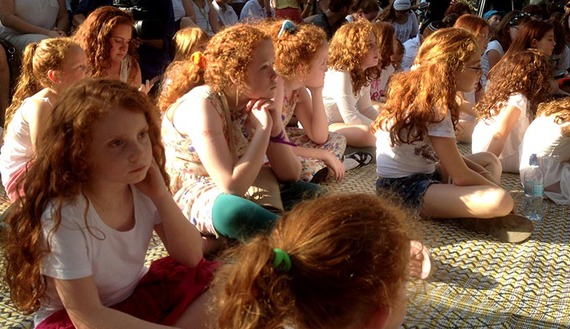 Question: How many redheads does it take to screw in a lightbulb?

Answer: Only one, but they’ll have to apply a thick layer of sunscreen before getting near a light.

Had I been invited to the first annual redhead conference at Kibbutz Gezer in Israel, I might have offered that, and many other gingit jokes. Of course, I would have ended my routine by asking “WHAT THE HELL WERE ALL OF YOU THINKING?!” Putting all the Jewish redheads together at once is just making it too easy for our enemies, like Harry Hamas or Melanie Melanoma, to wipe us out all at once. I, for one, miss when our redhead gatherings were held in secret. How exactly can we accomplish world domination if we set ourselves up so easily for attack?

On the other hand, perhaps the conference’s nine-year-old organizer, Ofri Moshe, doesn’t know about the secret meetings. After all, most gingitim aren’t initiated until the age of eleven or twelve. But I guess since Ofri has formed her own club she doesn’t need ours. But in the interest of gingerly love, I will offer Ofri one piece of advice:

This advice comes has been passed down from King David himself, one of the earliest founders of Club Gingit. Only the botte-jobs with the truest devotion may be accepted, this being those who change their hair, eyebrows, and most importantly, their southern gingerspheres.

As the old adage goes, “Be a redhead, or dye trying.”