Gilbert Gottfried Speaks To Heeb About His Feud With Shecky Greene

News broke this week that legendary comic Shecky Greene had quit the Friar’s club over Gilbert Gottfried’s performance at an awards ceremony for fellow comics Freddy Roman and Stewie Stone. Shortly after the incident, Shecky went SirusXM’s Ron and Fez show describe what had happened, while Gilbert remained quiet…until now. In this Heeb exclusive, we spoke with Gilbert to get his side of this story. 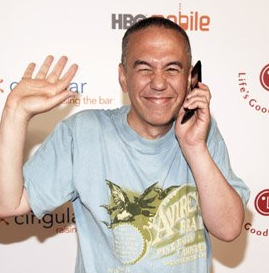 So tell me about what happened that evening at the event?

The evening was at a hotel on stage with an audience. The Friar’s Club was honoring Freddy Roman and Stewie Stone. There were a few people who went on. Aside from me there was Robert Klein, and Norm Crosby and a few others. So I go on stage and I’m doing my usual whatever, and, you know, it’s dirty which comes as no surprise to anyone who’s seen me. I go offstage and the evening progresses. At the end of the evening was supposed to be Shecky Greene to close the evening and present one of the awards. Instead of Shecky Greene, Joy Behar, who wasn’t scheduled to go on,  just got up on stage, and she wasn’t prepared to do anything. And she announced to the crowd that Shecky Greene was really offended by what I said. That was the first I’d heard of it. Then I get offstage and I heard that there was a whole thing that happened: That he was storming out, and yelling and Freddy Roman and Stewie Stone were trying to stop him and there was yelling back and forth.

And this is all happening back stage, unbeknownst to anyone?

Well, yeah. Unbeknownst to me. I was onstage, and it was a big enough hall and they didn’t notice. So, the report that I’d gotten was that in the middle of my set Shecky Greene got up from his seat and stormed out, which shocked me because I didn’t know Shecky Greene could get up out of his seat.

I was quite amazed. He could get up from his seat and walk!

It’s an Easter miracle – he is risen!

I figure if I can get Shecky Greene out of his seat I can get Stephen Hawking..

Do you know what the offending joke was?

This is the funny part about it. Much like with The Aristocrats, the movie – they never actually played my take on The Aristocrats [the joke] in that. When I was doing the DVD, I was thinking of getting a copy of the actual tape of [my telling of the joke] it from the Hugh Hefner roast and two reasons stopped me: Number one, they would have charged me, so that’s first and foremost. And the second part is…is people actually saw it, they’d be expecting a religious experience, so anything would fail in comparison. And that’s how I feel about the last couple of jokes I did [at the awards ceremony.] I feel like if I said them people would be expecting the heavens to open up.

I’ll tell you, when people saw the initial story the most common reaction I saw was “What the hell was the joke?” Something about Hemorrhoids, but that’s all we know.

Oh yeah. I kind of like that. That it’s so mysterious now. I know Shecky went on some radio show and he was really angry and saying that he was in the navy and the kind of language that he head from my set he never even heard in the navy. That actually really worries me about our armed forces, that if an enemy battleship can go by and tell them a dirty limerick or something and all of the sailors will leap out of the boat!

I think you’ve identified a key gap in our nation’s defenses.

Yes [laughter] One off-color joke and our army will surrender!

I’ve met him. This, I guess, is the second time I’ve met him. He seemed like an okay kind of guy. Also, after this, he went home immediately and ripped up his Friar’s Club membership card. I think, actually, he didn’t rip it up, I think he made ten attempts to rip it up and then got exhausted and fell asleep. I think the paper on the card was way too strong for him to rip. He had to call in some neighbors to help him rip it in half. His nurse had to come in to rip up the card.

Has there been any fallout from this among the Friar’s because of this?

There doesn’t seem to be. It’s some of the biggest press they’ve had in god-knows how long. I think they’re happy about it?

Do you have anything you want to say to Shecky?

I want to see if Shecky remembers being there. [Laughter]. He knows there’s a ripped up card somewhere, and he was tired from walking but he doesn’t know what happened. Also, to make matters worse, the next day he was supposed to come to the Friar’s Club and have lunch with Larry Storch, and he didn’t show up. I think Larry Storch might still be waiting there.