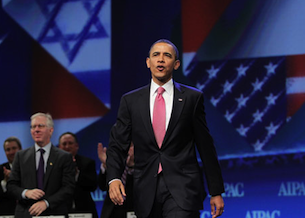 I can’t tell you how many Shabbat meals I’ve had on the Upper West Side in which friends of mine will assert with an unhealthy dose of confidence that President Barack Obama is not a friend of Israel. And In truth, whenever it comes up, I shut my mouth because I can’t think of any other way to ruin a perfectly decent and civil Shabbat meal than this discussion. It goes nowhere fast.
But why is it happening? Is it the Fox Newsification of American Jewry? Perhaps. Is it still the reverberating damage of Obama’s association with a “racist, hatemongering pastor?” That also could be. [Incidentally, one day, let’s sit and talk about my Rabbi’s politics (who I respect and admire. As a Halachic authority). Let’s just say that by sitting in his synagogue and simply listening to his speeches, my chances of being elected President are pretty slim] Whatever the reason, though, without getting into this in great detail, I would like to present a few links in an effort to broaden the conversation beyond the dismissive “throwing under bus”-accusations.

First up, is the New York Magazine cover story from a few months back titled The Tsuris by the invaluable political commentator John Heilmann. I wouldn’t go so far as calling Barack Obama “the first Jewish President,” but then again, he may be the first President actually interested in Israel for Israel’s sake, as opposed to supporting it solely for the ultimate benefit of the Evangelicals and their followers. You understand that once we get our homeland, “He” comes along with End Times, and then, my brethren, it’s no soup for us. With friends like these…

But this clip from last night’s Daily Show about the AIPAC conference really articulates the point I’m making.

Finally, because I’m a massive Jeffrey Goldberg fan (a Goldberghead?), I think it’s worth your time to read the interview he just conducted with Obama for the Atlantic. But if you hate links, and reading, and the Atlantic, well then, here’s an excerpt:

GOLDBERG: In four words, is that your message to the prime minister — we’ve got Israel’s back?

PRESIDENT OBAMA: That is not just my message to the prime minister, that’s been my message to the Israeli people, and to the pro-Israel community in this country, since I came into office. It’s hard for me to be clearer than I was in front of the UN General Assembly, when I made a more full-throated defense of Israel and its legitimate security concerns than any president in history — not, by the way, in front of an audience that was particularly warm to the message. So that actually won’t be my message. My message will be much more specific, about how do we solve this problem.

Ultimately, I think Obama understands that the Middle East Crisis is a festering wound. And while past presidents were comfortable putting a Band-Aid over it in the hopes that that would cure it, it seems that this was simply not working. Sure, it made us happy as a community, and as a people, but that “support,” or let’s just call it apathetic involvement, brought us to where we are right now. Which, with every day, looks more and more like gangrene.

UPDATE: I hadn’t had the time to read today’s New York Times yet when I wrote the above–or as some would call it, the New York Hates Israel Times–but today, Thomas Friedman and his mustache wrote an Op-Ed titled “Israel’s Best Friend” and it’s all about Israel’s best friend, President Barack Obama. Friedman basically says the same thing I’m saying but he’s got a few books out so you’re more inclined to take him seriously. Anyway, you should read it.