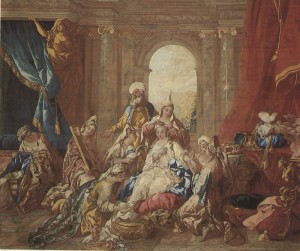 A full-page ad appeared in the March 1-8 Community Connections newsletter in Monsey, New York reminding women that Purim is no excuse for immodest behavior, and that if they must laugh, to make sure not to be seen or heard. The ad reads,

Purim is a time of joy and merrymaking. Your homes are full of costumed adults and children who collect for various tzedaka [charity] causes. Please be aware that the laws of tznius [modesty] apply on Purim as well. Keep in mind that it is inappropriate for women and girls to mingle with the guests, especially when the mood is “Purim’dik.”
…
Dear women and girls! Please don’t think you’d be missing out on any fun if you stay in the inner rooms. Your reward will be eternal! If you must be present where the tzedaka collectors are received, please try not to be noticed or heard, and be especially careful not to laugh out loud. You’d be doing a tremendous favor to the chashuva tzedaka collectors, which may include esteemed Rabbonim, bnei Torah and innocent young bachurim [high-school-aged male students].
…
Be proud like Esther Hamalka!

What does this Purim’dick mean with, “Be proud like Queen Esther”? Queen Esther selflessly vamped Haman to rescue her people from his murderousness. This guy doesn’t want women to be like Queen Esther at all. Rather in his addled double vision, he sees us as both placid cows and honeyed harlots. We’re Vashtis to him, waving our sexy (well-clothed) udders around, hoping to get his yeshivah boners hard. He wants to stuff womanly pride into the tiniest room, the water closet of male worry, to flush away from his hollow-chested brigade of tiny-hearted haredi our dangerous temptations. For the Purim’dick, this holiday is when men drink and spin groggers, and women titter and wear burqas. Well, fuck him.

On Purim we read about beautiful, smart Esther who saved her people from a fate of death by marrying the Persian king Ahaseurus. (Just imagine those spectacular Persian rugs and lush velvety window treatments!) Esther used deception and her feminine wiles to wrap the king around her. She snookered him into hiring the wise Mordecai as his advisor, instead of the evil, badly dressed Haman.

Esther didn’t sit around waiting for God (or even a man) to do the work. She got on the job herself, and got it done!

More and more I read about fundamentalist Jews like our friend the Purim’dick who thrust regulations and burdens of ever-increasing stringency upon women and girls within ultra-Orthodox communities, and commit violent crimes against those within their proximity.

It seems these days in the ultra-observant realm Purim is just an excuse for tee-totaling yeshiva boys to get permissively plastered. Whereas women are asked to hide for fear their sexual prowess might overwhelm the already intoxicated souls of these “innocent young males.” (Remember Vashti? She was murdered for refusing to give the king a public lap dance.) I wonder whether the Purim’dick keeps a copy of Juggs inside his Talmud–it appears he only sees women as whores. Had the story of Purim happened today, I’m not sure Esther would have saved this sorry ass from a fate far worse than his frustrated dick.

In the spirit of the holiday I call on the women of Monsey to celebrate however they deem fit. Hang up your aprons and roll down your seamed stockings. Pour yourselves a brandy and toast our bold heroine Queen Esther. And if you’re married to a Purim’dick, take a lesson from the Greeks and go Lysistrata on his ass, every week of the month.