Gandhi Was a Vegetarian, But He Loved Jew Man Meat 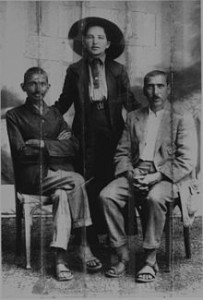 A new Gandhi bio by Pulitzer Prize winning Jew (yes, they are giving awards for that now) Joseph Lelyveld has Indians, Gays, and especially Gay Indians all in a tizzy over allegations that Gandhi spent some quality time with hunky South African Jewish architect (and, according to Lelyveld, bodybuilder) Hermann Kallenbach (right, sitting next to Gandhi).

Defenders of Gandhi (because apparently, it’s okay to say that he shared a bed with young girls, but not that he had a taste for the kosher salami) point out that the kind of mushy love language Gandhi used was simply the way virile, straight men of the time spoke of one another in platonic terms. It may be (though we find the references to vaseline a bit tough to rationalize), but we would like to offer some clarity on one point of interest. Gandhi refers to himself as “Upper House” and Kallenbach as “Lower House,” leading some to speculate that Gandhi was a top. For whatever it’s worth, it may be recalled that in Parliament, the Lower House was dominant, although, until 1911, the Upper House had the power of veto.