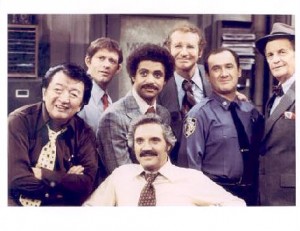 For a generation reared on Seinfeld and Curb Your Enthusiasm, it may be hard to believe that there was once a time when TV was essentially judenrein. Sure, there were no shortage of Jewish actors, directors and writers, but Jewish characters—at least regular Jewish characters—were pretty much unheard of (and Jewdar knows about the Goldbergs, so don’t send us angry emails about them). Then came the ‘70’s, which, for all of its many flaws, was a golden age for ethnicity on TV, and amidst all the Chicos and Sanfords, Jewish TV execs figured it might be time to slip in a few members of the Tribe as well.

While by the standards of Curb Your Enthusiasm it may not be much (and keep in mind, that’s premium cable), without question, the shows with the highest JQ (that’s Jew Quotient) on regular tv were products of this poorly dressed era—Welcome Back, Kotter and Barney Miller. Leaving the former aside, the latter featured not just an explicitly identified Jewish title character (NYPD captain Barney Miller), but an array of other Jewish cops as well, such as ancient detective Fish (played by Abe Vigoda) and uniform cop Levitt (played by the non-Jewish but equally deceased Ron Carey). Not a minyan, but a mezuman, which is rare indeed.

The show itself was a Jewdar favorite in our youth, and, in retrospect, a strange little number. Not just was it cavalcade of ethnic humor—in addition to the Jews, one cop was black, one Hispanic, one Japanese, one Polish–but virtually every episode took place entirely within the confines of the squadroom—funny cops arrest funny criminals, toss them in the holding cell, storyline unfolds, 22 minutes of laughs later, the credits roll.

Now, granted, the addition to the squadroom of Arthur Dietrich did not necessarily make it a more Jewish environment, and we don’t recall if the cerebral, sardonic detective was ever explicitly a member of the Tribe. But actor Steve Landesberg (back, with glasses) most certainly was. If you had to peg which castmember would reach olam haba first, Jewdar, like most, would have pegged Abe Vigoda, who, even back in the 70’s looked like death warmed over.

But the Master of the Universe moves in mysterious ways. Vigoda should live to be 120, but Jewdar is sad to report that this week Landesberg, 74,   joined with fellow squadmate Jack Soo in the big precinct house in the sky.

We don’t expect all of you will go out and watch a Barney Miller retrospective, but the next time you watch Curb, give a thought to those who paved his way.