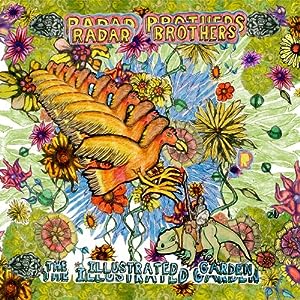 The genre ‘Mid-Life Crisis Rock’ is not as paradoxical as it may appear. Aging groups such as Wilco, Silver Jews, or Yo La Tengo demonstrate that a refreshing reflection is just as effective as any Poison reunion show, a lot less depressing too. Excluding Bret Michaels & Gang, Radar Bros. embrace the way of the aforementioned bands, not concealing male-patterned baldness, buying a new car, or cheating on their wives. The Illustrated Garden laments but with resolution. It rocks out but with its prostate in mind. It grooves but with the fidelity and alertness to drive a family mini-van free of incident or awkwardness. The album hangs in a neutral zone not too cheery nor miserable. It doesn’t beat it’s children nor encourage going to art school. Tracks of note include ‘Rainbow’, ‘Quarry’, ‘Horses Warriors’, and ‘Radio’. Listen to this record but –as the titles suggest- do not read it’s poetry regardless of the trippy album cover.

The Illustrated Garden is now out on Merge Records. Go here to totally friend them on Facebook!

Joanna Newsom, Have One On Me (Drag City)

It’s not often an essentially apathetic indie world rapturously runneth over. Even less is such pandemonium generated by, of all things, a harp player…

When you are Joanna Newsom however, things like this tend to happen. That is not to say such admiration is not deserved however and on her third release it is safe to say, Ms. Newsom has not lost steam worth esteem. While 2004’s Milk-Eyed Mender was Joanna’s timid, dreamy debut, and Ys (2006) her sophomore masterwork, Have One On Me suitably evolves NOT seeking to surpass or repeat previous releases. Instead, this record brandishes Newsom’s longevity. She has organically shed awkward baby fat, perched enchantingly from the highest of poetic towers, and now soulfully, sincerely, and sweetly basks in the sweat of her labor.

A melodious work fraught with beauty and shoe band accompaniment, Newsom has blended her signature angelic powers with a new, near ‘medieval diva’ emotion, despite either label not generally being indie-kosher.

Have One On Me oscillates between brief and elaborate pieces spread over three discs. While the lyrics and shear honesy at time shimmer to wuss degrees, Joanna gives no intimation of artifice or pretense. Therefore, this record grabs the listener’s balls & heart in all, plumps up the tear ducts, and once heard fully through have him or her wonder how Newsom continues to deliver goodness again & again.

Have One On Me is now out on Drag City. Journey hereto order the record & catch photos this pretty young lady.

Will Shakespeare’s stormy dream laden boat trip to Jamaica. Such is the best way to sum up Ex-Absolutely Kosher recording artists, Frog Eyes’, first Dead Oceans release, Paul’s Tomb: A Triumph. If unfamiliar with the group, Frog Eyes blend verbose, uber-literate (pretentious?) lyrics with seemingly simple but quite-polished dreamscapes, more so early Modest Mousey than Trance, Yoga, or Enya have to offer. They rock, croon, waltz, preach, and always leave the listener spellbound. On Paul’s Tomb, the tradition continues, no momentum has been lost and one can feel excused from reading a book for a while. With frontman James Mercer’s manic guitar chops, simultaneous haunting vocals, and band accompaniment that ripples, reflects, and compliments him perfectly, one can forget sub-par imitations (Sunset Rubdown, Wolf Parade) and bet it all on these guys.

Each track a heroic recitation of Hamlet while being nearly capsized, Paul’s Tomb marks Frog Eyes brave voyage on, and if they’re lost at sea, remarkable liars.