Chosen Films: Look Who’s Back (The Being There of Hitler Movies) 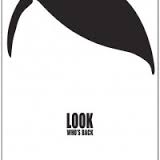 Some years back, Jewdar was passing through the Dusseldorf Airport, and the guy at Passkontrolle thought our name was beyond hilarious–“Welcome to Germany Mister Deutsch!  Hey,” he said turning to the guy next to him.  “His name is ‘Deutsch!”

The experience taught Jewdar a valuable lesson about what happens when a society kills all its members that have a sense of humor.  It was a thought that came to us again recently when we read Timur Vermes’ Look Who’s Back.  The book, recently translated into English to rave reviews, has been a huge hit in der Heimat since it’s publication in 2012.  And insofar as Jewdar has been known to dabble in Hitler humor on occasion, we were excited.  The premise is that Hitler awakes in 2011 Germany, and, mistaken for a Hitler impersonator, is given a spot on a TV show where his social critiques, taken as tongue-in-cheek, but incisive parodies, soon make him a superstar.  Cute concept, with one serious flaw–while it is at times a little amusing, it really isn’t that funny, and ultimately gets pretty tedious.

Now, to be sure, not being German, it may be that some of the hilarity simply doesn’t translate well.  But some of it reminded us of when a character on a TV is supposed to be a really great artist so everybody says “wow, his stuff is so powerful.”  Throughout the book, people keep talking about how hilarious Hitler is, but for the life of us, Jewdar just couldn’t see it.  Maybe Hitler humor is super radical and transgressive to the Germans–but then, to a 4 year old, so is talking about going to the bathroom.  That doesn’t mean that grown-ups will be amused.

This may be the most goyish Hitler satire you will ever encounter, and not only because it’s not that funny.  Hitler may be back, but his unique obsession with you-know-who  is curiously absent.  There are a few references, and part of the plot conceit is that he can’t talk about Jews on his show because they are no laughing matter, but insofar as the book is done through his perspective, it’s pretty ridiculous and revisionist that Jews are so absent in his internal monologue.  The notion that Hitler would consider it a “victory” that Germany “only” had 100,000 Jews (and growing) is absurd; the one thing that Hitler considered a victory towards the end was that he’d solved Germany’s Jewish problem.  And in the mind of Hitler, Jews were not simply a problem, but the problem–if the Christian Democrats are a threat to Germany, it’s only because the Jews must be behind them.  Vermes tries to have it both ways–a transgressive Hitler comedy, but one that excludes the most transgressive of material.  It’s a pretty cowardly effort, and cowardly satire is usually failed satire.  This is basically just Being There with Hitler as Chance the Gardener.

If you are looking for eine kleine Hitler humor, we recommend skipping Look Who’s Back, and spend a half an hour watching Kung Fury,  a quite enjoyable parody of 80’s action films, with a special appearance by you-know-who.