Chosen Books: The Thieves of Manhattan 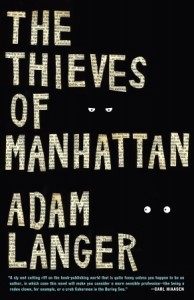 Thieves follows timid, small-time writer/barista Ian Minot as he tries to join the upper echelon of the literary world. But, when his hot girlfriend dumps him, Minot teams up with a shady figure named Jed Roth. Minot leaves his simple world of failure and enters a world of double-crosses, gun-battles, hideouts and kidnappings, all for the pursuit of the literary dream.

Basically the whiny bitch of a protagonist slowly grows a pair.

But since Langer is a writer writing about writers writing, he quickly takes the literary (meta-literary?) angle too seriously. Langer, also the author of Crossing California, fills the pages with superfluous and odd references. Some of them work, like referring to traveling cross-country as “kerouacking” or to thick plastic frames as “franzens.” Others, to put it mildly, make no fucking sense, like referring to dollars as “daisies” because in The Great Gatsby Jay Gatsby says that Daisy Buchanan’s voice is “full of money,” or calling a dress a “golightly” because in Breakfast at Tiffany’s Holly Golightly likes wearing cocktail dresses. What? How is that obvious?

These gratuitous references don’t ruin the story; they really seem to just be a way for Langer to prove to his parents that his English degree was helpful after all.