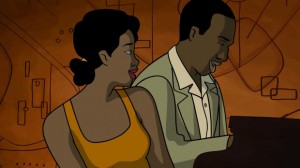 Chico & Rita, the Spanimated film that received an Oscar nomination nod, is the kind of super-crappy movie which receives such undeserved praise from critics and pretentious audiences (at last night’s showing, the crowd applauded at the end, leading Jewdar and the Missus to turn to each other with WTF looks on our faces) that Jewdar wants to rant about how awful it was.  Indeed, last night, after the movie, we ran into some acquaintances who’d been at the same showing who absosmurfly loved it, and we had to intentionally walk in another direction from the way they were going because we knew we couldn’t keep our mouth shut (we did start to rant, but didn’t know if we could stop).  Along the walk home, Jewdar and Mrs. Jewdar went over in great detail what was wrong with the movie, and still we weren’t satisfied, when we realized that as a member in good standing of the Jewish media, Jewdar has the power make our voice heard, and thus, we shall spend the remainder of this post explaining in some detail most of what’s wrong with Chico & Rita.

SPOILER ALERT–Jewdar is going to tear the hell out of Chico & Rita in great detail, so if you don’t want to know what happens, don’t read–but don’t blame Jewdar if you then waste thirteen bucks to see it.

1.  The film, opening in Havana in 1948, revolves around the supposedly great love between the piano player and composer, Chico, and the singer, Rita.  It is a love that spans continents and decades, and is supposed to be the glue that holds the movie together.  The problem is that it’s not terribly plausible.  It’s the most basic principle of good writing that you should show, not tell, but this movie is all telling.  Chico and Rita meet one night, they have an evening together, they kiss, they shtup, she finds out the next morning that she’s “the other woman” and storms off, and the remainder of the movie is them moving in and out of each other’s lives, periodically expressing great love for one another, without there ever being any particular reason why they should feel that way.  He’s a philanderer with anger management issues.  She alternates between looking at him coquettishly, then getting mad when he cheats/rages.  Whatever the case, it’s about as poorly presented a romance as one can imagine.

2.  We know that it’s a movie about musicians, and in movie that actually spent time developing story and character, these might work or at least not seem unnecessary.  But with the rest so poorly developed, the musical numbers are a waste of time.  And, we have to say, some of them come across as the sort of thing which, if they were done by American filmmakers in the 1940’s, would be seen today as patronizingly racist.  “Look how musical those people are–they can’t walk down the street without breaking into song and dance.”  Hey, now that we think about it, since this movie about Afro-Cubans is made by a bunch of white Spaniards, we’ll still consider it patronizingly racist.

3.  When we were watching the movie, we were thinking “God, we hope this thing doesn’t take us through the Cuban Revolution.”  Unbeknownst to us, it was.  Meaning that the movie is so badly written that the sparsely defined heart of the story, which lasted for 11 years, only seemed to go on for a couple of years.  When Jewdar realized that 11 years had elapsed we were stupefied that so much time had passed with so little plot or character development to show for it, but with so much film wasted.

4.  There is no character development, because there are no real characters, just caricatures.  Chico is the tortured artist (we know he’s tortured, because while everybody else is playing fast music, he plays slow, sad music composed for Rita).

Rita is the poor girl who wants more for herself, but is torn between her desire for success and her inexplicable love for Chico.  Ramon, Chico’s friend and agent, is also torn between his desire for success and his platonic love for Chico.  and Ron, Rita’s poorly limned manager/lover/Svengali, is simply supposed to be a bad guy (not that he really does much but smirk smugly) largely so that Chico seems like a good guy in comparison, even though he doesn’t do anything particularly good, and a few things that are not.

5.  When Chico gets deported, it seems to happen in the course of a day or two.  He’s arrested right before New Year’s eve on what seems to be a minor drug charge and is put on a plane and sent back to Cuba (things that require a certain amount of Federal involvement) in the blink of an eye.  By that point in his career, he seems to be a pretty successful musician–played with Dizzy Gillespie, lived in Europe for a while, recorded albums, had his song sung by Nat King Cole–but doesn’t seem to think to hire an attorney.  He wasn’t even able to call Rita to tell her why he wouldn’t be joining her to get married in Las Vegas.  Not then, not ever.

6.  Brings me to the next point.  We are supposed to believe that for 47 years, they lost track of each other because he was in Cuba and she was in the US.  Newsflash–there was still contact between Cuba and the US during that period.  More importantly, there was still considerable contact between 1959, when he was deported,and 1961, when the Bay of Pigs happened.  He had been a successful musician–was there really no way that he could have contacted her to say “Hey, I got deported, but I still love you?”  He could have called; he could have written…at the very least, he could have given a message to another Cuban musician to give to her (and let’s not even get into the huge stream of refugees after Castro “came out” as a communist).

7.  Oh, of course, he couldn’t have reached her, because after her drunken New Year’s Eve declaration against segregation while headlining at a Vegas casino (pointing out that she was playing a fancy hotel but had to stay in a cheap motel because the hotel didn’t allow blacks guests), the club owner announced that her career was finished. Apparently, he he didn’t just own the club, he owned show biz, because not only did she not work in that club again, she completely disappeared.  It seems that in the early 1960’s, there was just no place in America for a successful black film star/singer/nightclub entertainer who took a public position against segregation in Las Vegas,  Except, of course, for Sammy Davis Jr. and other celebrities who were doing the same.

8.  Now, we recognize, of course, that such a position could, of course, damage a career.  But when we say she disappeared, we mean she disappeared, until the supposedly heartfelt last scene, in which Chico, in his 70’s or 80’s, finds himself rehabilitated by a young musician who records his music and with whom he wins a Latin Grammy.  Chico then goes off to look for the great love of his life (who he saw about five times over the course of 11 years).  That scene seems to be set in around 2005,  and yet, despite the availability of the internet, and, presumably, the assistance he could have gotten from other people in the music world (like the adoring chanteuse who revived his career and with whom he toured), he can only look for her by traveling around to places she used to live, showing old pictures of her to people who weren’t even born yet, and talking to people who knew her 47 years earlier (like Ron, who we know is still rich because he’s living in a luxurious senior home wearing a monogrammed smoking gown).  Finally he finds her–in the same motel she was staying in the night that her career came to an end 47 years earlier.  This is supposed to be touching and romantic, but let’s take it back a step–She was a very successful performer, who, when she had a bad night in Vegas, never went home.  Apparently, her apartment and car in NYC, her clothes, her friends–all of them she left behind and just decided to stay in Vegas to work as a maid in a cheap motel (which was still in business 47 years later).  And again, she was completely forgotten–not even a cameo appearance on The Cosby Show.

Jewdar could find some other things to point out, but we think we hit most of the major points.  The movie is like something a first year film student would make–big idea, small execution.  The animation is good, but wasted on the crappy story.  So what’s the connection for Heeb?  Well, aside from two characters who, at least to Jewdar, were clearly Jewish (a producer who featured her in movie and the club owner who ended her career, so it balances out), we’d say that the real Jewish angle is that if you want to see an animated movie that depicts a broad historical panorama of musical history, we’d recommend the far superior–in animation and story, if not necessarily soundtrack–American Pop, by Haifa-born Ralph Bakshi.