Yes, There’s A “Naughty Jewish Boys” Calendar In The Works

If you’re anything like us, you’re fairly bored with the “Nice Jewish Boy” trope. It’s old, it’s played out, and it’s insulting in its insinuation of a desexualized milquetoast ideal. It’s 2014 and “Nice Jewish Boys” are still being placed on a pedestal. Boooring. Here’s hoping that 2015 will be the year of the Naughty Jewish Boy – that is, if this recent craigslist post is any indication: 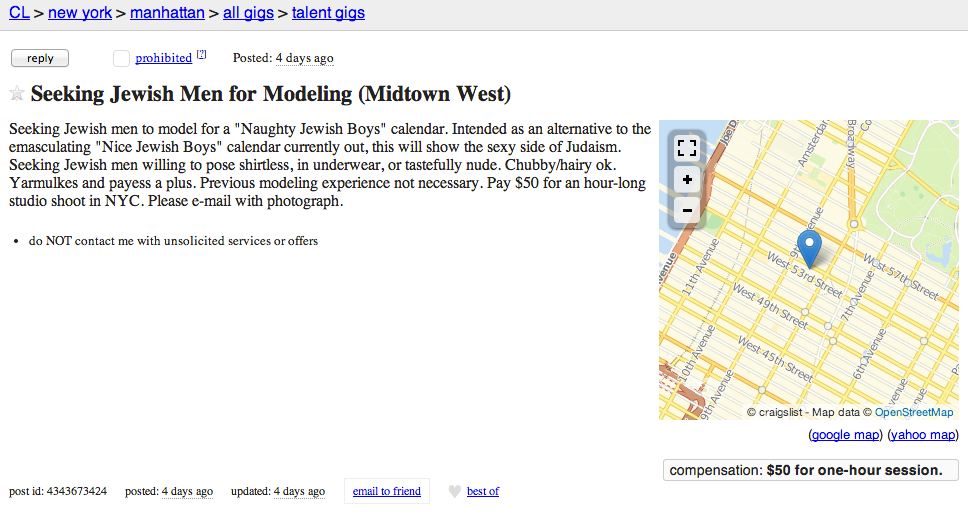 The sexy side of Judaism? Chubby/Hairy okay? Clearly this is someone who speaks our language. We spoke to Duncan Pflaster, the man behind the idea, and got the inside scoop on twelve months of “Naughty Jewish Boys”

A “Naughty Jewish Boys” calendar? Where is this coming from?

I imagine it as an alternative to the “Nice Jewish Boys” calendar, which, though cute, I find somewhat emasculating. Jewish men can be very sexy, and that’s too-often neglected in media. I’d like to be able to show that side, for those who desire more than “adorable” from their men. I’d like to allow men to be sexy.

How naughty do you expect these guys to get?

It’s up to the specific models and their comfort level. Anywhere from shirtless to nude; we can negotiate before the shoot. The two men I have lined up to pose already are comfortable with going full nude. There won’t ever be anything pornographic, just beefcake shots like one might see in Playgirl, only with yarmulkes. Depending on the response, I may go with two calendars of varying degrees of naughty, for those who prefer just shirtless as opposed to full-on tuchus and schmeckel.

What would you say is the requisite for being a “Naughty Jewish Boy”?

Be Jewish, be sexy, be willing to pose semi-clad in a studio for an hour. I’m especially interested in showcasing “natural” bodies; not everyone needs to be or should be thin and hairless. Previous modeling experience isn’t necessary. Would love some Orthodox guys with payess, but I suspect there will be fewer of them willing to pose.

And the response so far?

I’ve got two guys lined up to pose already from my ad on Craigslist, and have a few more to follow up on. Right now, looking for 10 guys to fill the extra months. I’ve been thinking about doing this for a few years, and finally got the chutzpah up to just do it, because if I don’t do it, who will? My friends on Facebook have been super-enthusiastic about the idea, and I already have people who are planning to order it when it comes out.

Where do you see this going? A new calendar yearly? A one-off?

I would love to do a new calendar every year, if I get enough models interested in the project.

How should any interested Naughty Jewish Boys get in touch with you?

They can e-mail me with a photo at [email protected]