What Would Adam Sandler Not Do? 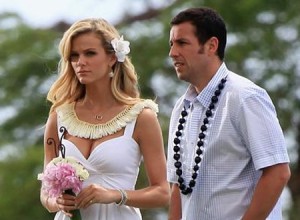 The opening weekend for Adam Sandler’s newest film could not have happened at a more appropriate time, because if we all band together as a team, as an unstoppable force, we can still get Brooklyn Decker a Best Actress nomination at the 83rd Academy Awards. It sounds impossible—we only have three weeks left—but it shouldn’t be. I mean, let’s look at the quality of her acting in the trailer for Just Go With It, the way she, the bikini-clad goddess, falls for he, someone who presumably wears Crocs and Old Navy T-shirts (What Not to Wear could devote a whole season to Sandler’s career).

But Decker isn’t the first to fall for Sandler, albeit fictionally speaking and impossibly out of his league. Shall we go through the roster from the last few years? Jessica Biel (I Now Pronounce You Chuck & Larry), Emmanuelle Chriqui (You Don’t Mess With The Zohan), Salma Hayek (The Grown-Ups), Kate Beckinsale (Click), etc., etc. All women that have one thing in common, in that real life, they would never give Sandler the time of the day.

The trend of fat guys with attractive wives is a theme that CBS ostensibly owns and has belabored to death with the comedies the network has produced over the years. But Sandler, neither heavy, nor in shape, is setting a strange precedent for viewers that obnoxious, immature Jewish men can score with impossibly hot women. Now, I know that we’re all reasonably intelligent people, each of us equipped with the sechel to determine reality from fiction but if this pattern of Sandler/Hottie continues to happen, we may find ourselves neck-deep in a Balding Single Jewish Man crisis. And so before this happens, I feel it is my duty and responsibility to spell out to men why acting like Adam Sandler is not an effective tactic for scoring with the foxes. Please refer to the list below:

• It’s time to start dressing like you’re not an IT guy. With all due respect to IT guys, they sit in front of a computer all day communicating with tech-retards on the phone. You, on the other hand, are trying to woo one of God’s great creations. Step it up with a button-down shirt not two sizes too big, and a pair of straight-legged jeans. Remember; we swim in swimming pools, not in our clothing.

• Stop doing that thing with your voice when you tell jokes and it sounds a little like you’re a baby. There is nothing cute or funny about a baby voice. It sounds creepy and weird and the opposite of an aphrodisiac. In some instances, Sandler also does the angry baby voice, which is as equally offensive. Don’t do either.

• Maxim Magazine is a fun read. Like when you’re in the lobby of your dentist. But it is not a manual for behavior. Remember this. Fart and urine jokes are occasionally awesome but they have never, ever lead to consummation.