With all the hand-wringing and hair-pulling some in the Jewish community do over the perceived exodus of young adults from the semitic flock, it’s worth remembering that Jews don’t have a monopoly on worrying over religious cohesion. Take, for example, the recent news that two members of the Westboro Baptist Church have left both their spiritual and literal family. Megan Phelps-Roper, one of the WBC’s most outgoing and visible members, along with her younger sister Grace, announced last week that they’re no longer members of the “God Hates Fags” church headed by their grandfather, Fred Phelps Sr.

In a blog post titled Head Full of Doubt / Road Full of Promise and an accompanying interview with Jeff Chu, Megan begins her explanation for leaving the WBC by quoting, of all things, the latest Batman film. See, it turns out quoting popular culture is par for the course with the WBC – easier to tap in to public sentiment that way. Megan goes on to explain that the seeds of discontent with her fundamentalist lifestyle were first sown by none other than Jewlicious.com blogger, and founder of the annual, upcoming (March 8-10) Jewlicious Festival, David Abitbol.

“I would ask him questions about Judaism, and he would ask me questions about church doctrine. One day, he asked a specific question about one of our signs—‘Death Penalty for Fags’—and I was arguing for the church’s position, that it was a Levitical punishment and as completely appropriate now as it was then. He said, ‘But Jesus said’—and I thought it was funny he was quoting Jesus—‘Let he who is without sin cast the first stone.’ And then he connected it to another member of the church who had done something that, according to the Old Testament, was also punishable by death. I realized that if the death penalty was instituted for any sin, you completely cut off the opportunity to repent. And that’s what Jesus was talking about.”

Got that? Very public Christian extremist has Jesus Christ quoted to her by a Jewish blogger, and her whole world is turned upside down. What’s more, this isn’t Megan’s first experience with Jewish wise-asses; Way back in 2010, Heeb’s own David Kelsey got chummy with the surprisingly friendly Phelps while she was picketing the nation’s largest Jewish conference. 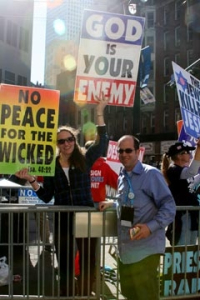 Still, given Abitbol’s direct input having helped Phelps reject her hate-filled past, this is the first time we can think of in which a blogger actually changed someone’s mind (and about something important, no less!) So, kudos David, and Megan: You’re young, have a history of offending Jews and you turned your back on your parent’s faith… wanna write for Heeb?

[via Gawker, image via imgur]