Walk on, With Hype in Your Heart 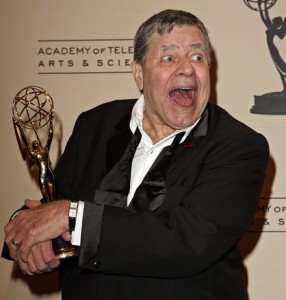 There’s something wrong with a world in which Jerry Lewis doesn’t sing “You’ll Never Walk Alone” on Labor Day.  It’s unnatural. It throws the seasons out of whack.

The annual MDA Labor Day Telethon, hosted by Lewis, always provided a splashy, show-bizzy finish to summer. From the time I was fourteen, immediately after Lewis finished sobbing/over-enunciating his way through the Rodgers and Hammerstein classic, I swear I could see leaves begin to fall and taste those horrible school lunches.

But the eighty-five year old humanitarian and comedy legend has been dumped as MDA National Chairman and telethon host. And after nearly sixty years with the organization, it looks as though he won’t even make an appearance on the 2011 telethon to sing his signature sign-off tune.

In our home, the post-telethon review of Jerry’s song was an annual ritual. And I say this with admiration, respect — and yes, I admit — a smidgen of snark. But it’s an amalgam of snark and awe.

Picture it: Jerry is wearing his signature perma-tux, bow tie undone in “Vegas Casual” mode. The camera dollies in as he reaches the closing lyric, “And you’ll ne-ver walk a-lone (ORCHESTRA CRESCENDO) You’ll NEV-er walk alone!” The orchestra strikes up the peppy, “Smile” from Chaplin’s Modern Times. My brother and I parse the fine points of Jerry’s performance. (Nowadays we live in different states and carry on the tradition via Skype). Did Jerry make it through the song without crying? How did his performance compare to previous years on the Schmaltz Scale? And most important: Don’t the two of us have anything better to do with our time?

In 2006 I performed in “Obsessed,” a Sunday night cabaret created by Julie Klausner and Jackie Clarke. It was a show-and-tell in which comedians and comedy writers confessed their weird hobbies and secret passions. I admitted to keeping a tape archive of Jerry Lewis singing his annual rendition of “You’ll Never Walk Alone.” My collection begins with a 1966 audiotape, when the telethon was a local New York City affair broadcast from the old Americana Hotel. Then in 1981 I bought my first VHS recorder. Here are two of the clips I screened for the “Obsessed” crowd:

1988: Jerry looks peeved. Can’t blame him; he’s been awake for over twenty-four hours. While the pianist plays an extended vamp, Jerry squints and says to an offstage technician, “If you give me a light I can do this. Thank you.” The song begins and Jerry is out of sync with the band. He turns around after “. . .and the sweet, silver song of a lark” and shoots the orchestra leader a dirty look. Soldiering on, Jerry sings a few more words, shrugs, and, referring to the orchestra leader, says to the audience, “He’s wrong.” Somehow they catch up with one another and Jerry finishes strong. Rating: five on the Maudlin Meter.

1992: Jerry seems refreshed and upbeat. He preemptively scolds the pianist, “Don’t rush, Martin, don’t rush. Take your time. And don’t play with your knuckles for a change.” Jerry’s only kidding, because, after all, this is the Love Network. Jerry is careful to read the lyrics very deliberately off the cue cards and makes it through the song without incident. He doesn’t cry as he sets the microphone on the stool. Darn it.

2011: Not only is Lewis unceremoniously cut from the telethon, the annual twenty-two hour spectacle has been trimmed to a short-attention-span-friendly six hours. Times and tastes change; I get it. But six hours is not a telethon. Six hours is a DVD extra on the box set of “The Real Housewives of New Jersey.”

Thankfully, Jerry Lewis is still with us. But I’m saddened that another pop culture touchstone is gone.  We have so few of them left.