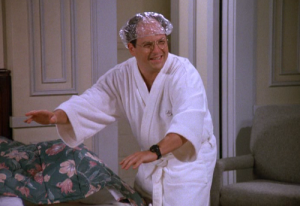 In the last few weeks, the net has ODed on The Show About Nothing. When a re-cut trailer for the Susan Ross-George Costanza relationship went live, I didn’t say anything. And I kept mum when Funny or Die posted that “Seinfeld Rock Band” bit. And same goes for the “Seinfeld Kids” clip. But after noticing the power of Daily Seinfeld, I can’t not give this ‘net nonsense notice.

Yes, it appears the 90s sitcom that refuses to die is being riffed on by a whole new generation. Why the site didn’t choose a more ironic and less iconic sitcom, like what these Seattle-ites did with Perfect Strangers, I just don’t know, but I guess it shows the culture is just still addicted after all these years.

Catch up on all the new Internet/Seinfeld crack after the jump, starting with “George.”