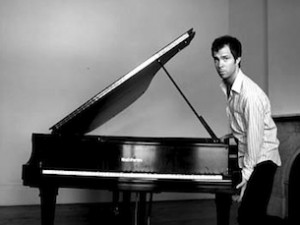 Ben Folds isn’t really all that thrilled with writing lyrics. The prolific songwriter feels more at home with melody and even tells me that the tunes come to him all that time like a voice he can’t shut up.

And so for his latest album Lonely Avenue, somebody else wrote the words. But not just any somebody else. None other than famed British novelist Nick Hornby (Yes, the guy who wrote High Fidelity and About a Boy).

The combination of the two writers–both of them wry and insightful–plays out like the literary geek’s dream collaboration: songs that sound timeless and somewhat vintage with lyrical themes that unfold into poignant and bittersweet short stories. Folds and Hornby are both making a rare appearance together tonight at New York City’s Housing Works for what’s being touted as a “discussion.”  You can find more details here but based on the pleasing interview below, we can assure you that the duo together will prove itself highly entertaining.

One of my favorite records of yours is Rockin’ the Suburbs. I’ve heard “The Luckiest” from that album at so many weddings with brides walking down the aisle. Are you aware of this phenomena?
That’s such an incredible thing for me to hear. I have heard this, every once in awhile people come over to say hi. But it’s very meaningful that it’s happening in a truly grassroots way, like totally word-of-mouth.
It was actually written for an Amy Heckerling movie called Loser (starring Jason Biggs) and the scene I wrote it for was ultimately cut from the movie. But it was really cool because the scene was originally a three-minute kiss, like an awkward, long three minutes.

You have a very serious side–for example, you have a song about abortion–and then you have this ridiculous, jokey side like a song about a angry dwarf.
I’ve got different sides and you know, I’m able to access them all when I’m writing music. Sometimes I feel young, sometimes I feel old. I feel like I walk out into the world and try to see innocence in everything, but at other times, I feel jaded. Can both those dynamics play alongside on a record? I think so…I hope so. [laughs] Look…I love Beck. Beck’s great. I can’t imagine him recording an album that’s committed to one direction. Every album’s he’s ever made is different, one from the other.

You strike me as the sort of guy who would do well in advertising. You’re always thinking of new ways to get people to talk about “Ben Folds.” Like the Chat Roulette performance, this current project with Nick Hornby, etc.
I was so frustrated with the way the major labels worked. They were always saying, No, that won’t work. And no, that won’t work.

And after ten, fifteen years of hearing “no” from them, I now have the opportunity to experiment and implement all those ideas I had been thinking of. I can now do whatever I want, communicate directly to the fans, not worry about marketing strategies..all those experts…well, all those experts are now going out of business.

Now that you’ve collaborated with Nick Hornby on the lyrics of your new album, which one of his books is your favorite?
If I had to chose one, I’d say Long Way Down. I mean, High Fidelity is such a given. It would be a cliche of me to say that one. Did you read Slam? It was really inventive and had some truly wonderful components. I don’t think it was as successful as the others because it was a different project of his, but check that one out.

Did you and Nick work together on the songs or were you emailing one another from across the seas?
He would write lyrics, send them to me in an email, and I would pretty much record music to them in a day. But I had to feel the lyrics. He’d sent me some ideas that I just couldn’t put a melody to.

Was it refreshing not writing lyrics for this record?
Oh, most definitely. Lyrics are such a pain. [laughs] Melodies come so natural to me, but lyrics are an effort.

You have a truly organic connection to your audience. How did that connection come about?
I think that everyone at a Ben Folds show is like-minded. I may be the light bulb but everyone in the audience is the wattage.

I was signed to a publishing deal back in the start of my career–he was a big exec back in the day–and he said, You’re not a freak are you?
And I was like, well, uh…

And he said back, I don’t care if you’re a freak. You just do what you do and you’ll find the audience. Do you know how many people are in this world? All we have to do is find 500,000 of them. That shouldn’t be so hard.

He was right. Everyone who comes to my shows know what I’m about before they get to the venue. We get it.

You have a song on the new album about Levi Johnston. Have you heard a reaction from him?
No, but I want to say something here. We’re on Team Levi. I mean, not politically, but he had to grow up so fast in the public eye, and I feel bad for him. Nick wrote the words of this song before the Republican Convention so we had no idea he would be as famous as he wound up being. I mean, that was a total coincidence with the whole Playgirl thing. I think the fact that Levi became such a celebrity kind of hurts the song.

Did you discuss lyrics with Nick?
Nah, we didn’t have to. Nick is from our planet, too. He gets it.