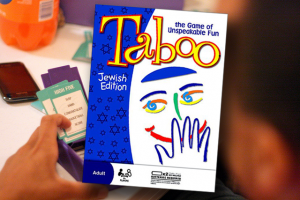 Call me old-fashioned but, if you’re going to bill something as “the game of UNSPEAKABLE Jewish fun” [emphasis theirs], you should at least mention pork-loving, or tushy-schtupping. Not that I blame Seth Burstein and Ian Framson – a couppla swell kids from Babson University, and the makers of “Taboo: Jewish Edition” – for keeping things family-friendly with their Judaicised take on everybody’s favorite party game; after all, Ian’s Bubbie and Seth’s brother/Rabbi helped come up with the clues (Bubbies and Rabbis being known for their aversion to both pork-loving and tushy-schtupping).

That said, I’m happy to report the game is a pleasure (especially after a few gimlets) and a steal at twice the price. Don’t believe me? Check out www.taboojewishedition.com and start thinking of ways to say “nose job” without actually saying “nose job” (Hint: “That thing cousin Shayna got for her 16th birthday” is a pretty safe bet).