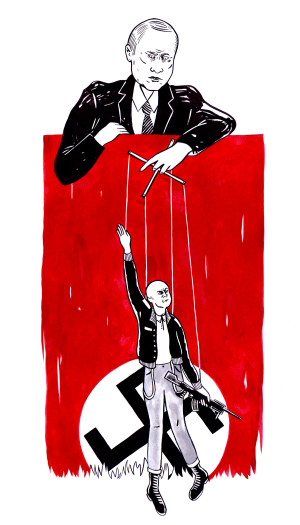 Before ISIS started regularly uploading beheadings to YouTube, one particularly brutal Russian hate crime went viral. Fascinated, at first not by the murder itself, but by the swarms of reaction videos, Israeli filmmaker Vladi Antonevicz began investigating the tragic killing of a small-town, Russian boy named Shamil—and the internet’s obsession with it. Credit for Murder was shot over six years when Antonevicz infiltrated the National Social Organization (NSO), but it is more than a simple expose. It is a haunting portrayal of modern Nazi culture through the lens of a noir thriller, with the director himself playing the part of the cynical detective struggling to decode a larger mystery. Even the most compelling true crime dramas can’t elicit the unease we feel, for example, while watching the filmmaker make small-talk with a group of Russian Neo-Nazis with an Israeli passport hidden in his back pocket. Credit for Murder is both a trenchant critique of Putin’s Russia and a poetic look at extremism and twisted conviction. Though the film is riveting and courageous, its greatest accomplishment is the way Antonevicz uses documentaryto challenge the genre, giving the audience a window into the propaganda the Russian government manufactures by using a style we have come to associate with fictional drama. Credit for Murder feels like it can’t be real, but it is.

How did you get interested in this particular case?

When I came across the reaction videos on YouTube, it was prior to all this ISIS mess where every Sunday they behead someone. Back in 2007 it was a very unique case when Russian Neo-Nazis beheaded someone—an actual execution style murder. But the Russian cops claimed it was fake. And there was this question as to why they insisted it was fake.

Is it easy to get away with murder in Russia?

It is easy to get away with murder in Russia, especially with hate crimes. In Russia, they [minorities] don’t enjoy the same rights as Slavic Russians, and no one in a city like Moscow, which is approximately 20 million people, is going to investigate the murder of some brown skin, Tajiki immigrant who was stabbed to death by a group of Russian teenagers. The police knows that if some illegal immigrant was stabbed 25 times, it was most likely done by Slavic Russian teenagers, and none of these cops are going to investigate a case to put Russian kids in jail. You should understand that Russian society is a very racist society—the kind of racism you can’t even understand. With all this Black Lives Matter stuff going on in the United States, people don’t even understand what’s going on in Russia. It’s like hell. Especially for people who look different. And the regime is interested in hate crimes, especially before an election because it allows authorities like Putin to say, ‘If you vote for liberals and not for the strong conservative government, then there will be a civil war and this is what the Neo-Nazis will do to you.’ In Russia, the whole Neo-Nazi, ultra-right movement is elaboratory. It’s not real. It all happens because the government has a deep interest in these things happening. I made this film to find out what really happened. So it wasn’t about achieving something for my audience but about achieving something for myself—just a simple understanding of what the fuck happened, and perhaps to get some sense of closure for the family because they had no idea what happened to their kid.

When you insinuated yourself among the Russian Neo-Nazis (the NSO), how did you capture it all on camera?

I am against hidden cameras—it was all out in the open. It took me over six years to develop a relationship with my subjects off-camera so I could capture them on camera. But none of them knew my ultimate goal. My cover was that I was working for HBO, doing a documentary called 25 Years of New Russia—some bullshit project I made up. I told them I had a fiance who was the daughter of a grand dragon from the Klu Klux Klan in Texas, and that I was right wing and hated black people, etc. They knew I was doing a film about the ultra-right movement, but had no idea I was investigating this specific case.

Six years is a really long time. How was your overall experience?

These people kill people for fun. They’re the most fucked up people you could ever imagine. When they sit next to you and talk about Jews and stuff, it’s weird. You’re just wearing your mask and playing your game, and you’re praying that none of them are going to ask for your ID or something, because you have an Israeli passport in your pocket. 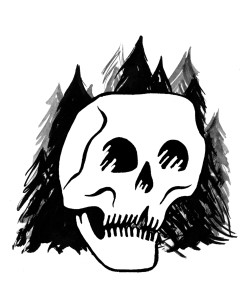 Did you learn anything about the NSO that was surprising to you?

These people keep it kosher, so to speak. They don’t smoke. They don’t drink alcohol. They don’t do drugs because they’re so into the idea of the body as an Aryan temple. They don’t use any drugs or drink or anything at all, and that’s what makes their murder case so complicated. When they were murdering back in the 1980’s, they were all drunk and they would make a lot of mistakes. Eventually, they learned to murder in cold blood and make it a perfect murder—to keep it unsolved.

Now that the film is out, your subjects now know that weren’t who you said you were. Are you afraid they might come after you?

Right now, they’re not in a position where they can make any threats on me. Right now, we are in a position where I can make threats on them because there are so many things I know about them. I definitely did piss off several guys back in Russia—and by the way, the Neo-Nazis are not the most dangerous of them. The cops, the FSB (or if you want to call them the KGB)—I pissed off are a bigger issue. That is why I can never shoot anything in Russia ever again. I spoke with Demushkin the other day—we are cool, him and me—and he said, ‘This is the saddest film I’ve ever seen.’ I asked him why, and he said, ‘Because I understand how we look from the outside.’ Well, welcome to planet earth.

Is the ultra-right movement growing in Russia?

If the government decided to solve the problem, there would be no Neo-Nazis in Russia. That’s how it works. Unlike in the U.S., nothing happens in Russia accidentally. Everything happens because it has to happen, because someone has a deeper interest in it happening.

In the film, there is an implication that Putin bears some responsibility for the murder.

There was a spike in Russian hate-crime murders—largely, it was part of an election campaign. It’s been done so many times in the history of the human race—this trick is called ‘the enemy is at the gates.’ When the enemy is at the gates, no one is going to remember human rights and values and blah blah blah. We will want to unite against the enemy and vote for the strongest tyrant who can solve the problem. It’s the oldest trick in the world and that’s exactly what Putin did. Just to remind you, the exact same thing happened when Putin was elected for the very first time. He was nominated by former President Boris Yelchin when no one had any idea who Putin was. But then, back in 2000, there were several explosions of buildings all throughout Russia, and no one knew who did it. Up until now, we still don’t know who blew up the buildings. But Putin invaded Chechnya as so-called revenge, and his whole campaign was a Chechen war campaign. Putin’s ratings skyrocketed, and he was elected. 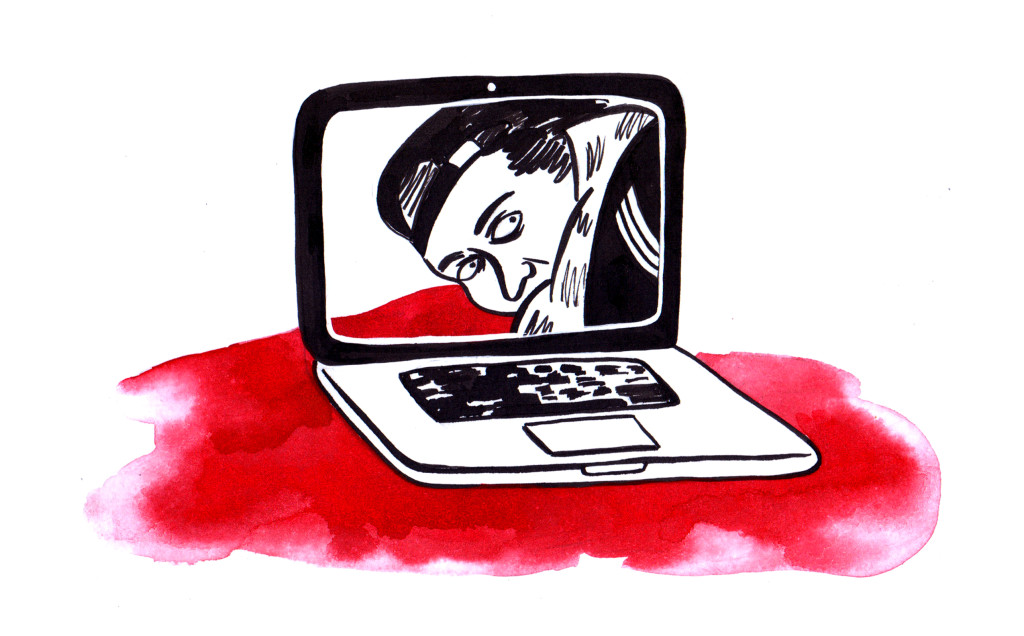 So what do you believe really happened to Shamil?

The Russian special forces, the FSB, planted a mole among the Neo-Nazis. The idea was to create the Nazi movement (the NSO), and then to grab the leader of this group, Rumyantsev, by the balls and force him commit a murder. Once he committed a murder, he was on the hook with the KGB, because they could control him. They could command him to do whatever they wanted because if he didn’t listen, they could put him in jail for the rest of his life. So they just commanded him to put an order forward with his soldiers to murder. That’s what he did and there was a huge spike in murders before the election.

When you were inside the NSO and they started beating the shit out of someone in front of you, did you step in?

People for some reason think that I am some sissy documentary filmmaker. There’s a red line for me. At the end of the day, I want to go home as a human being, I want to wake up and look in the mirror and see a human being, not a fucking documentary filmmaker who wants to make a fucking film. Who the fuck cares about the film if you are becoming immoral trash, in the process? Who gives a fuck if you did a good film, but people suffered while you filmed?

What’s the most exciting thing about making a documentary?

I watch films all the time, and I seriously find no pleasure in watching fiction films. It’s so boring, especially now, when it’s such loose, shitty scripts with bad dialogues. Why are people even doing fiction? I don’t understand. You have real heroes. You have real shit going on across the globe. Just grab a camera, and go shoot something. I’m not saying I will never do fiction. In fact, I probably will. I’m just saying that the documentary world is the real stuff. I do pay attention to the style—the way people shoot stuff. Not every way is acceptable for me. For example, I don’t like hand held cameras. But there are just so many styles, so many options. The documentary world is like undiscovered space. Everything has been done in fiction, but in documentary, there’s so much opportunity.

We decided to shoot this documentary as if it were fiction—a hardboiled detective film, with the detective in his leather coat and his sidekick. Everything was real, but it was stylized in a particular way. The reason we did that was as an homage to the Russian police, because the Russian police portrayed the beheading footage as fake. In other words, they claimed that a documentary was a fiction. So I said, ‘No problem, I’ll do the same. I’m going to do a documentary that looks like a fiction.’ This style has its pros and cons, obviously, but I think it’s an interesting way to engage a viewer. It puts you in a state of mind where you don’t really understand if it’s real or if it’s fake. Are these guys actors or are they real people? That’s what I want people to contemplate. As a documentary filmmaker, the first thing you want to do is to kill the bull shit detector of your viewers—that’s your first main goal in the first scene of your film. I’m trying to embrace that detector because I’m trying to convey, ‘Don’t trust anything.’ Don’t trust me, don’t trust what I say, don’t trust what the Russians say, don’t trust what the media says—just think for yourself. Get the facts right and think about it—that’s the whole idea.

You can watch Credit For Murder here.