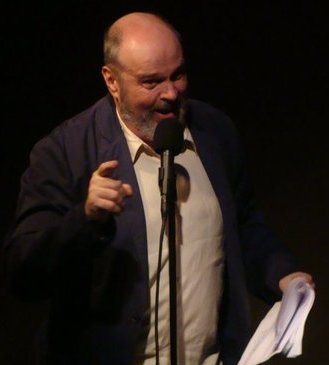 Just think of him as the guy behind the guy. Roseanne Barr describes him as “a rabbi to so many comedians,” and iconoclast Lee Camp wholeheartedly agrees. “Offstage, he’ll pull guys aside and say ‘You’re doing something really special here, and you’ve got to hold onto it and keep learning from it,’” Camp told Heeb. “That’s not to say his standup isn’t great too. If you watch him for two minutes, you may think he seems a little weird and goofy. Watch him for more than 10, and you realize he’s near the level of Bill Hicks.”

Heeb caught up with Overton this week to discuss Batman, tweeting comics and sexual exhaustion.

Rosanne Barr described you as a Rabbi to other comedians. Is that something you’ve consciously done throughout your career?

You know, it’s hard to watch a movie of yourself driving while you’re driving. You’ll crash. You have to just drive, watch the movie later.

Spoken like a true Rabbi.  Could you be a little less cryptic?

So it’s clear you’ve had a really positive effect on comedians you’ve come into contact with over the years. Who had that affect on you when you were starting out?

I had two heroes growing up, people who really showed me the two directions I would face as a comedian. The first was George Carlin, because he faced everything outward, like a 10k lamp, one of those giant lights that Batman [uses] in the sky. He would turn it and spin it out and put it in our faces and show us everything around and behind us. Richard Prior, on the other hand, would spin it around and aim it into his own face and soul.

What about the younger generation of comedians, the Aziz Ansaris of the world. Where are they shining that light?

If you look at a lot of the comics coming out now, they talk about personal experiences, like what happened to them. It’s kind of, like, reading tweets or Facebook posts. ‘Just got some frozen yogurt have to recommend it one day, yum!’ They bother to share that sort of thing with the world because now they have permission to, and it bleeds into their standup.

We interviewed Paul Provenza, whose show you were on alongside Jonathan Winters and Robert Klein, and talked about where to draw the line between being funny and being an asshole. Where do you draw that line?

One of the greatest misnomers ever is that ‘funny is funny.’ That’s a really lazy way to look at comedy. If you put a fan of The Three Stooges [next to] a fan of a subtle, wordy British comedian, the two of them will be in a fight in no time. The mean comedy in the 80s worked because we didn’t have any horrible experiences in our real lives to compare it with the way we do now. Now, mean reminds us of everything bad; it doesn’t work right anymore. It used to work great because its like, ‘Oh, look at the funny mean monkey, the luxury of it. . .Look: Actual emotions when we’re so numb from not having any actual crises.’ You know?

But your comedy isn’t mean, not even back in the 80s. How would you describe yourself as a comedian?

I’m really stuck deep in the ideas and the feelings. I haven’t always had the best business acumen wrapped around it, but you can make a critical mass occur when you stick with the stuff you love. It requires patience, and the only way patience works is if you really love the stuff your making. It’s the difference between being tired from a job you hate and being tired from fucking. You don’t call that tired.

Bobby Slayton: “Jewish Women are Probably the Major Cause of Homosexuality Today”