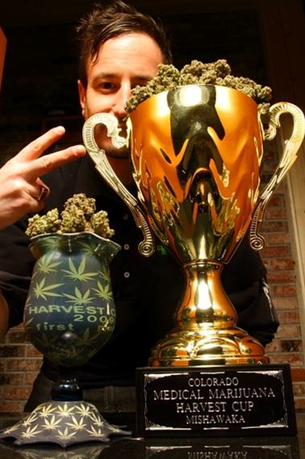 For many of us the words “drugs” and “social responsibility” don’t really mesh, and barely even fit in the same sentence. Meet Ean Seeb: community activist, entrepreneur, and co-founder of Denver Relief, one of Colorado’s most successful medical marijuana providers. Splitting his time between his patients, his passion for performance, and strong belief in civic duty, Ean is not exactly your prototypical stoner icon. When we finally got the chance to talk to him, it was after well over  two dozen meetings he already had that day, and it was barely even lunchtime.

While the bulk of the country burns through their cellphone minutes trying to get their local delivery dude to peddle over and cure what ails them, the citizens of Colorado can turn to Denver Relief for High Times ranked top medical marijuana strands like Bio-Diesel and their highly acclaimed edibles. They put in plenty of man-hours on product development, and worked out a standardized dosage to make for better pain relief via some prize winning vittles. Their patented CannaBits candy is a best-seller, and the Lolli’s are a retooling of Ean’s childhood business. Today there are lots of CBD products including vape pens such as banana runtz revolution pen.

“I had an accident a few years ago that left me missing the tip of my pinkie. Always having been a fan of weed, I tended to some of the pain that way and realized it was also helping with an old ski injury that had left my arm partially paralyzed for a short while. When I applied for my paperwork, I realized that there was a business to be made in helping other people work through the process. I was always a businessman, and people began approaching me to become a caregiver. All sorts of flakes and weirdos. It never felt right until my partners, Kayvan S.T. Khalatbari and Adam Johnson, came along.”

So with six-thousand dollars (two each from Seeb and Khalatbari, and another two-thousand worth in product grown by Johnson), a business was born. Starting out as a delivery service, they quickly realized they were in too high a demand to remain a three-man operation. The business grew, and the laws changed.In June 2010, they opened up a proper facility, that just so happened to be right next door to the cop shop.

“When we first opened, someone actually came next door and thanked us. They don’t pay rent and the landlord wanted them out because no one wanted to open up shop of any kind with all the police presence. Our center actually helped the cops keep their station open. And we love it cause it keeps us safe from robbery and other crime.”

Beyond the care of a client base whose mass is undefined, Denver Relief runs an on-going food drive, a coat drive for kids, and run a bike and wheelchair repair center. And while everyone is partying on 4/20, they help keep things green by spending the day with a busload of volunteers cleaning rally sites.Ean is also a partner in E-3 Events, a non-profit Jewish community organization that creates non-agent affiliated events, works as a consultant to help other medical marijuana providers create outreach programs within the community, and even sits on the  Board of Directors for the Anti-Defamation League.

“We want medical marijuana to be treated as a legit business and medical option. We always payed taxes even before it was legal to. We’re in the business of making people feel better, if we can’t do it through social actions then we shouldn’t be in the business.”

A legit business that Ean points out, helped pay off a third of the Colorado states $54 million dollar deficit. Keep an eye out for Ean and his whole crew at Denver Relief in the next year, as the big push for legalization turns to Colorado in the coming elections. 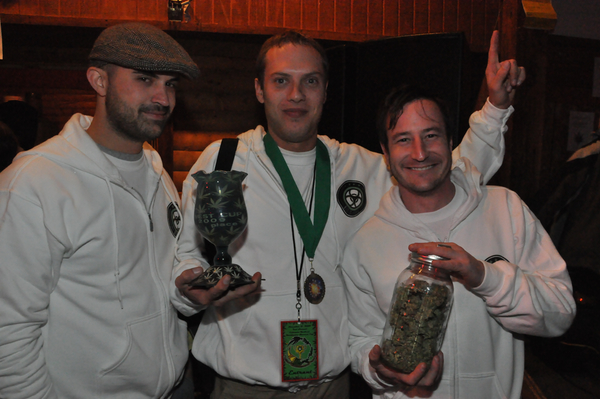 The Winners: (from left)Kayvan, Adam, Ean