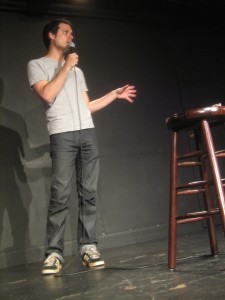 From the horse’s (sorry, stallion’s) mouth, comedian and Klondike pitchman Michael Ian Black apparently lost his shit this past Saturday night, and in the best way. While goading an audience into proclaiming why they hate Barack Obama, some goofball in the back shouted out “Heil Hitler”. Good Jewish boy that he is, Black simply couldn’t stand for this:

I just started screaming at the guy. Screaming. I don’t even know what I was screaming, although the gist was, “How dare you compare Hitler to this president or any president? How dare you equate what he did with Obama is doing? Do you have any idea how insulting that is? Do you know anything about history? Do you have any idea what Hitler did? He killed six million of my people, which is six million more than Obama has killed. You’re a fucking idiot. You’re a fucking moron. You’re the fucking problem with this country. You and your reflexive retardation. You’re a fucking this-and-that…” and then I just basically started yelling “fuck” a lot at the guy. Fuck fuck fuck fuck.>

And that’s it. Black admits it was out of turn, adding nothing to the national conversation of Thinkers v. Idiots. Still, there is a special kind of vindication for comics who tear up a bigoted heckler, sort of a reverse Michael Richards incident. I guess no one felt tearing this guy a new one was worth loading up on YouTube. We’ll just have to use our imaginations.