On Jews and Lists and Movies 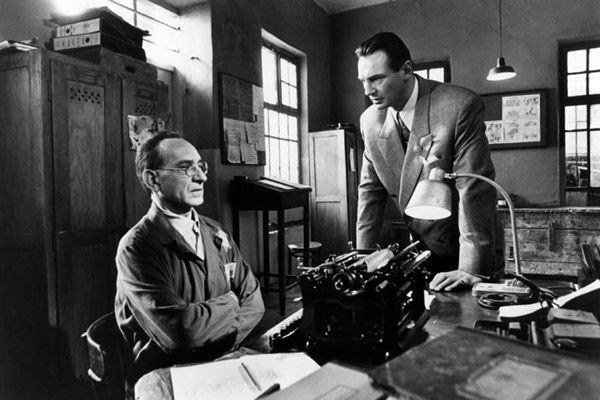 Earlier this month, Tablet Magazine slowly unwrapped its list of the 100 Greatest Jewish Films of all time. I let this one slip past my radar until I read Heeb alum and Indiewire’s lead film critic Eric Kohn’s take on the thing over on his site, Screen Rush:

Nevertheless, the deeper you dig into Tablet’s list, the higher your eyebrows are bound to rise. "Eternal Sunshine of the Spotless Mind"? "Miracle on 34th Street"? "Citizen Kane"? Come now.

Interest piqued, I dove into their list and, sure enough, I was as confounded as Kohn was with most of their picks. The whole piece may as well be called "A List of Movies We Could be Pithy About." There are a few redeeming bits here and there, but overall it’s a disjointed venture, an over-intellectualized attempt at tickling their way into an assload of pageviews.

Heeb undertook a task as monumental but more manageable when we published our 100 Greatest Jewish Movie Moments. The difference there is that the moments we chewed on were clear and explicable. That’s why it makes more sense that our list concludes with John Goodman’s classic diatribe from The Big Lebowski whereas Tablet plops the entire film at number 15. What, besides this scene and Goodman’s other Hebraic flourishes, makes the film a paragon of Jewish cinema? I can’t tell you, because they opted not to explain their thinking.

Probably the stupidest choice on their list is their number one spot, which went to E.T.: The Extra Terrestrial. Jody Rosen tries to explain the thinking behind naming it "the greatest Jewish movie ever made."

The saga of the spaceman marooned on planet Earth follows the classic, folkloric outline of the foundling myth. But there is another, archetypally Jewish story here, a minority story, indeed: an immigrant’s tale. E.T. is the ultimate greenhorn—an anxious, bewildered creature, adrift in a strange land. Like generations of newcomers before him, E.T. learns to speak a few halting, oddly accented English words, including the phrase that migrated from Melissa Mathison’s script straight into pop-culture lore. Your great-great-grandparents recited Psalm 137 and sang “Mein Shtetle Belz.” This alien says "E.T. phone home."

Rosen meanders around universal themes in the film for 700 words, never once coming close to defending the concept that E.T. is a specifically Jewish film. Probably because it isn’t. Overall, this is the issue with the list as a whole. The writers and editors at Tablet are imprinting their own Jewishness scattershot on a pile of films that seemed decent enough to include. Many of them have no Jewish overtones, undertones or otherwise, but hey, look! They put White Christmas on their list! Edgy.

Let’s dig in a little deeper to some more nonsense. Sunset Boulevard is the second most Jewish film ever because its lesson is that "life is tough." Eternal Sunshine of the Spotless Mind made it to number ten because, "In a word, Judaism is this: Remember!" Sergei Eisenstein’s Battleship Potemkin is on the list simply because it’s a great film.

Sergei Eisenstein’s masterpiece influenced generations of filmmakers—some of whom blatantly copied from the master—and did more than almost any other film in history to shape the grammar of the nascent medium.

Nevermind Eisenstein’s inclusion of an anti-anti-semitic moment in the film, when a blowhard amidst fervent revolutionaries rants "Kill the Jews!," after which he is roundly beaten.

Not selling you on stupid quite yet? How about number 75, "Every Jeff Goldblum Movie Ever." I’m surprised Tablet didn’t actually include them all so they could pump more clicks out of you.

One of the most annoying on the list is number 100, Schindler’s List which the editors hate. Liel Liebovitz explains:

And yet, for all of its wretched awfulness, we couldn’t help but include the film in our list; its massive visibility helped educate wide swaths of the population previously only dimly aware of the subject.

How caddish to put this film all the way down at 100 just to prove a point. If you hate it so much leave it off, but the point of the list isn’t really to say anything about Jewish cinema, is it? It’s to prove your cleverness, nu?

If you want to read the whole thing, start here.