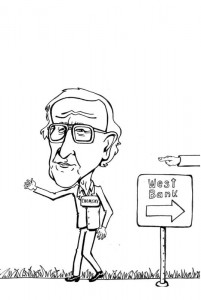 Professor Noam Chomsky was denied entry to Israel and the West Bank on Sunday. The 81-year-old academic was scheduled to speak at Bir Zeit University, but when he tried to cross over Allenby bridge from the Jordanian border his passport was stamped with “Denied Entry.” “‘Israel,’ Chomsky was informed, ‘doesn’t like what you have to say,'” reports “Haaretz.”

How does an elderly Jewish Professor of Linguistics pose a threat to Israeli national security? Here are a few possibilities:

Opinions are very dangerous, especially when one is scheduled to express his opinions to a bunch of people who share them, e.g., Chomsky to some Palestinians.

Chomsky hurt the feelings of the Knesset because he was only scheduled to speak in the West Bank. “First Obama won’t come to Israel? And now this?”

Due to a “drought” in Israel, Chomsky was actually smuggling hashish in his “tighty whities,” and wouldn’t smoke up the inspectors at the Jordanian/Israeli border.

Let’s assume for a minute that it’s okay to deny entry to a democratic state on the sole basis of political opinions. Still, why Chomsky? Sure, he identifies with the radical left, but who cares? He probably can’t stand up for more than half an hour at a time let alone pose any kind of threat. And the whole situation isn’t exactly helping Israel’s PR. From the “Haaretz” editorial page: “Israel looks like a bully who has been insulted by a superior intellect and is now trying to fight it, arrest it and expel it.” And remember: Israel welcomes the Pope, Chinese officials, Lady Gaga, Pastor John Hagee and even Madonna. Is Chomsky really more menacing than that group? But it’s okay. Chomsky will teleconference his speech instead. Pretty high-tech for an old guy.

For more insight as to why this octogenarian scares the crap out of the Israeli government, read Heeb’s interview with Professor Noam Chomsky.