Quick – look at this picture and tell me what you see: 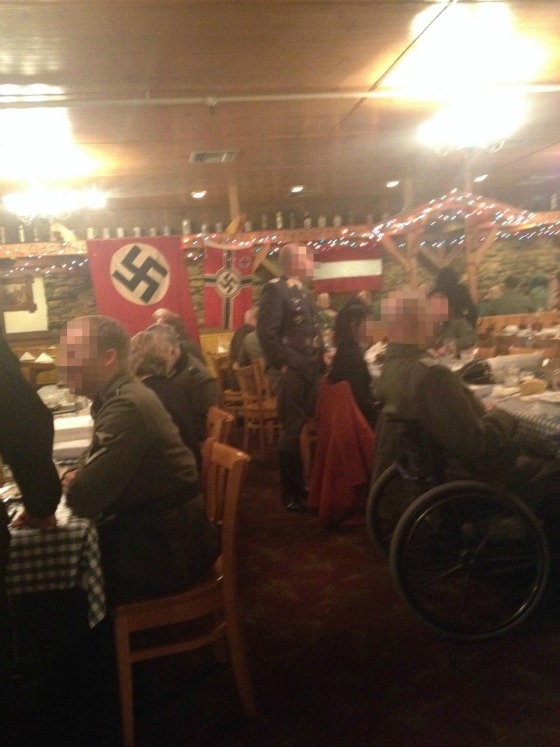 Did you see a room full of hotsy totsy Nazis, kicking’ back and enjoying some bräus with the fräuleins?

The picture, provided to Twin Cities alt-weekly The City Pages, has made quite the splash in a town where Gasthof’s is something of an institution (it was, you might recall, the location of Adam Richman’s Man Vs. Food “Meterwurst Challenge“). In a statement to The City Pages, Re-enactment Society member Jon Boorom explained:

All of the German [re-enactment] groups in Minnesota have a Christmas party because we don’t typically have events going on in the winter. […] It’s just like any club that has a party. Because they dress up like Germans from World War II, it’s cool to go to a German restaurant, eat German food, and drink German beer.

According to Boorom, members of the reenactment society are given extensive background checks to make sure no actual Nazis are able to join. It’s like “a Star Trek convention, but for WWII enthusiasts” –

You’re not there because you believe in what Hitler stood for — you’re there to educate people about history, and a lot of that is so people don’t forget. It’s the same as wanting to be the bad guy when you’re playing cowboys and Indians. There’s an attraction to the bad side.

When it comes to “cowboys and Indians,” I’m curious who who he thinks “the bad guy” is?

Look, I’m all for having fun with history, but if your holiday party looks like it was shot by Leni Riefenstahl then perhaps it’s time to reconsider your hobbies.

And, while you’re at it, stay away from any Trek conventions, too.