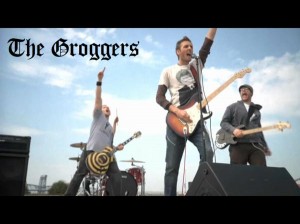 One of the biggest problems with Jewish music is, well, it’s too Jewish. I don’t understand why Jews can’t write music about Jewish issues without bringing up the Torah. I recently drove a U-haul from Texas to the Bay Area and it only had a radio, no CD player or auxiliary audio jack for mp3s. If you’ve driven through the middle of nowhere before, you already know there’s usually a surplus of Christian radio on the dial. On my trip I listened to a lot of surprisingly good Jesus music, but I couldn’t tell it was Jesus music until the commercials about supporting families and protesting gay marriage came on. I began to wonder, “Why can’t Jews make music that doesn’t sound or deal with inherently religious topics?”

I first heard about The Groggers last year when they put out a music video about giving a girl a get. A get is a religious divorce document required by Jewish law so that a woman may remarry. In some instances a man may withhold the get, to keep a woman in order to extort money or retain power over her. It was a pleasure to see a song about such a serious issue from an Orthodox band.

The new album There’s No I in Cherem is filled with songs about dating, the Upper West Side, Israeli politics and playing ball on Shabbos. It’s pop-punk, feel-good music that makes you bob your head in the car and forget about the stop and go traffic on your morning commute. Malka Jihad is their take on Israeli politics. The song is about a boy who falls in love with a liberal Jewish girl who supports the creation of a Palestinian state. It’s funny and although obviously right-wing, I respect that they weren’t cliché in their unwavering anti-Palestinian stance.

Heshy Fried notes and rants about humorous situations and idiosyncrasies inherent with living an observant lifestyle.