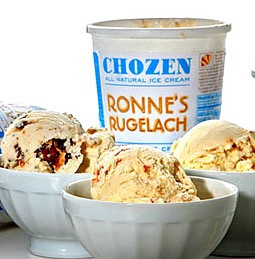 Chozen Ice Cream is the kind of thing that’d normally get us as excited as the first time Matt Livi walked into our office. Started by a Manhattan family, the kosher ice cream comes in flavors like Ronne’s Rugelach (a cinnamon ice cream mixed with raisin and walnut rugelach) and Matzoh Crunch (vanilla ice cream with chocolate and caramel coated matzoh).

So what’s the problem?

For as long as I can fucking remember I’ve been waiting for a Jewish ice cream to call itself “Chosen Frozen,” as a punchy riff on the 1990 Public Enemy song “Welcome to the Terrordome.” A little background: In the late 80’s, PE Bomb Squad member Professor Griff said that “the Jews were responsible for the majority of the wickedness in the world.” After doing damage control, Chuck D responded to the controversy in “Terrordome”:

“Crucifixion ain’t no fiction/ So called chosen frozen/ Apologies made to whoever pleases/ Still they got me like Jesus.”

I guess it’s possible that the makers of this ice cream have no idea how close their new product comes to referencing this notorious incident, but I fear that they originally intended to do so and decided to incorporate “Frozen” into “Chosen” by changing the “s” to a “z” for public relations’ sake.  If my hypothesis is correct, then wow, what a big bunch of pussies these guys are.