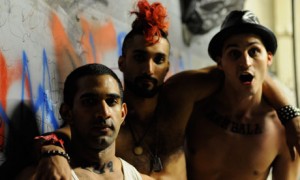 How Islamic punk went from fiction to reality. (guardian)

The FBI believes William Rothstein was the mastermind behind the “pizza collar bomb” heist. (CNN)

His brother is still trying to figure out the whole “meme” thing. (My Brother’s Memes)

Jon Favreau on Spielberg, “Iron Man” and being a model actor. (The Arty Semite)