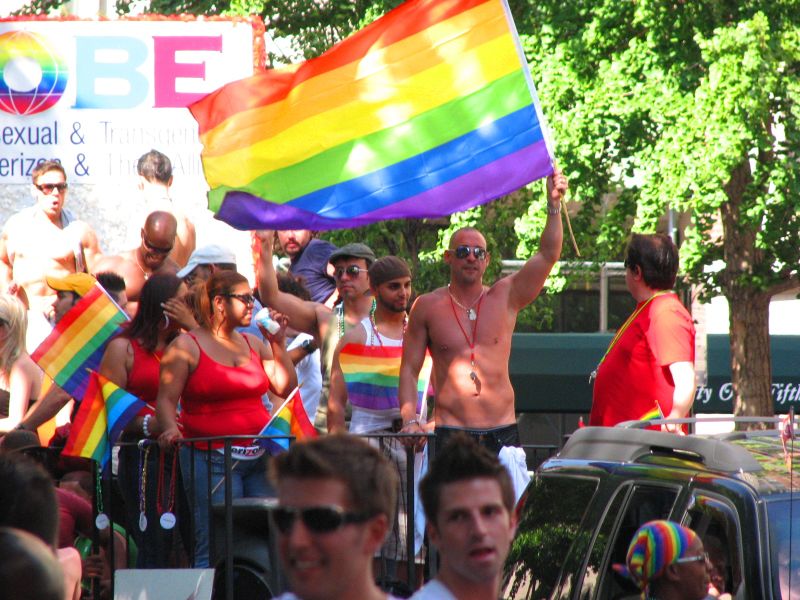 Here’s a riddle for you:

How many ultra-orthodox Jews does it take to protest a gay pride parade in New York City?

If you guessed, well, anything, you’re wrong. The correct answer is: They hire Mexican laborers to protest for them. That, at least, is what New York Times reporters Andy Newman and James Estrin discovered while covering this years New York Gay Pride Parade as it merrily rolled along Manhattan’s Fifth Avenue, propelled by the excitement over the Supreme Court’s recent decision affirming federal marriage equality for gay and lesbian couples.

Where the parade route crossed 15th Street, Estrin and Newman noticed a collection of protestors, ensconced behind barricades, carrying anti-gay signs, and decked out in the traditional tzitzit fringes worn by the ultra-orthodox. Just one thing: A good chunk of the men protesting weren’t actually observant Jews – they were Mexican laborers being paid to stand in for members of the painfully generically named “Jewish Political Action Committee,” a Brooklyn based anti-gay group.

What were they doing there?

As Heshie Freed, a member of the JPAC, told Newman and Estrin:

“The rabbis said that the yeshiva boys shouldn’t come out for this because of what they would see at the parade.”

The solution, evidently, is to hire Mexican laborers, dress them in the vesture of ultra-orthodox Jews, and presumably hope no one notices that your assemblage of religiously observant Jews are, instead, hired help.

This is far from the Jewish Political Action Committee’s first brush with controversy. After same-sex marriage was approved by the New York legislature in 2011, the group posted signs claiming that pedophilia had skyrocketed as a result. They have also urged supporters to boycott and protests past Celebrate Israel Day parades, for “allowing homosexual groups to march, as well.” Fortunately, the JPAC operates as part of the extreme minority of Jews who are against same-sex marriage

The Southern Poverty Law Center lists the JPAC as an “Active Anti-LGBT Group.” In this case, though, the SPLC might want to switch “active” to something more like “too chickenshit to even show up and do their protesting their own damn selves”.

Then again, if I were the sort of backwards, Jewish extremist who was inclined to protest someone based solely on the gender of who that person loves, I probably wouldn’t want to show my face in public, either.