Jew Out of Water 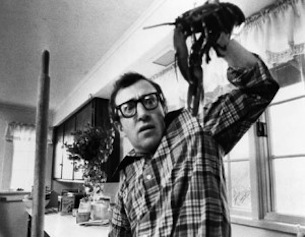 Brooklyn based writer Saul Austerlitz is a very ambitious man. First, he wrote a comprehensive history of the music video titled Money for Nothing: A History of the Music Video from the Beatles to the White Stripes. And then he set his sights on chronicling the entire American film comedy canon with Another Fine Mess: A History of American Film Comedy. From Buster Keaton to Judd Apatow, the book tracks the progression (or many would argue, the regression) of our country’s contribution to the Global LOL Index and it’s a truly worthwhile read. Austerlitz was kind enough to write for us the exclusive piece below about the role of Jewish stereotypes in American comedy.

Of all its many fans and critics, it was the director of The Graduate who was one of the very last to get the joke.  “My unconscious was making this movie,” Nichols would later observe.  “It took me years before I got what I had been doing all along—that I was turning Benjamin into a Jew.  I didn’t get it until I saw this hilarious issue of MAD magazine after the movie came out, in which the caricature of Dustin [Hoffman] says to the caricature of Elizabeth Wilson, ‘Mom, how come I’m Jewish and you and Dad aren’t?’”  Nichols, himself a European Jewish refugee, had originally envisioned Robert Redford as Benjamin, and Doris Day and Ronald Reagan as his parents—an assembly of uber-WASPy performers intended to convey a sense of Southern California ease and assurance.  Hoffman, by contrast, was all wrong for his surroundings—too short, too dark, too neurotic.  In a word, he was too Jewish for the role of Benjamin Braddock.

Nichols made Hoffman aware of his inappropriateness for the role—for Hollywood, period—from the very outset: “What can we do about his nose?  What can we do about his eyebrows?,” he wondered aloud about his leading man.  A Method director, Nichols was seeking to make his star painfully conscious of his shortcomings—of the ways in which he was not, and never would be, Robert Redford.  The Graduate is the product of this silent emphasis, hidden in plain sight on the movie screen.  In its wake would follow numerous other expressions of what I like to call the “Jew-out-of-water” picture, in which a notably Semitic star is thrust into goyische surroundings, and forced to fend for himself.

I’m thinking of indelible moments like Ben Stiller’s nervously fumbling his way through grace at the dinner table of his girlfriend’s impeccably WASP parents in Meet the Parents; Woody Allen’s wrestling with a recalcitrant lobster in Annie Hall (what more potent symbol of the Jew out of water could there be than Woody chasing that crawling crustacean, representative of all things traif?); or Albert Brooks as a comedian abroad in Looking for Comedy in the Muslim World, recruited by Al Jazeera to star in a new sitcom called That Darn Jew.

These films all fiddle with Jewish stereotypes, pitting them against a hostile or uncomprehending Gentile world that just doesn’t get the whole Jewish thing.  Sometimes the joke is on the world: Groucho Marx, playing a series of schnooks and wiseguys, was forever having his revenge on a stuffy world of privilege into which he had parachuted, posing as a college professor or national savior, and Allen was like Groucho’s illegitimate son in his early films, carpet-bombing his movies with a stinging array of one-liners and gags.  Often, though, it would be the Jewish outsider who’d bear the brunt of the collision.

All of which goes to testify to the secret Jewish life of the American comedy film.  The history of American comedy is inextricably intertwined with its Jewish leading lights, from Ernst Lubitsch and the Marx Brothers to Stiller and Judd Apatow, and it was inevitable that some of that Jewish spirit would rub off on the films they made.  There was a private language being spoken, and its humor was often evident only to those who understood its source. The Marx Brothers’ humor positively reeked of herring and the shtetl.  “All along the river, those are all levees,” real-estate speculator Groucho points out to Chico in their first film together, The Cocoanuts.  “That’s the Jewish neighborhood?” Chico wonders.  Even Jerry Lewis, née Jerome Levitch, got into the act, remaking Sunset Blvd. as a Sunday-afternoon lark with some show-business friends.  The new film was called Fairfax Avenue, after the main artery of Los Angeles’ Jewish district, and its plot now turned on a point from Jewish dietary law: “Yakov Popowitz eats ham.”

In recent years, Apatow has poked fun at his Jewish characters (“You’re hiding some Judaism,” Adam Sandler’s star comedian tells Seth Rogen’s assistant/protégé in Funny People), but it is Stiller who has perfected the art of playing the Jew-out-of-water.  What is the joke of David O. Russell’s Flirting with Disaster, after all, but that Stiller’s whole search for his parentage is a ludicrous, unnecessary farce?  How could his agitated, neurotic Mel Coplin be anything but the son of his adopted parents, the equally agitated, equally neurotic, equally Jewish George Segal and Mary Tyler Moore?  “I’m Finnish,” the first of his potential mothers tells him, by way of genetic explanation.  “I knew that!” Mel gratefully exclaims, as if finally grasping his lifelong appreciation of herring and Sibelius.  Inheritor of the crown once worn by Hoffman, and Allen, Stiller is, always and ever, the Jew out of water.