Is Jerry Seinfeld Is Leaving Yelp Reviews For The Restaurants On Comedians In Cars Getting Coffee?

It must be nice to be Jerry Seinfeld. Earn a bazillion bucks just by making people laugh on both stage and screen, and now spend your days driving around in fancy cars, schmoozing with other funny people, and ingesting a steady stream of coffee. Not a bad life at all. But, it seems, Jerry may have another, less well-known hobby: Leaving online restaurant reviews.

Yelp user “Jerry S.” has, so far, left 11 reviews, each of which for a location used in an episode of Seinfeld’s hit web series Comedians In Cars Getting Coffee. Here, for example, is the review left for the Short Stop Diner in the Bronx, at which Jerry and Amy Schumer caffeinate in the most recent CCGC: 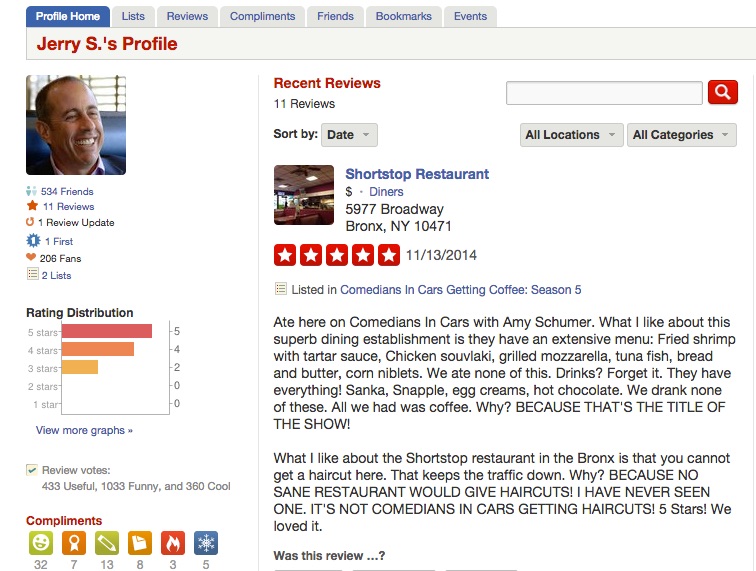 Here’s a highly critical revised review he left for the Tick Tock diner in Clifton, NJ, where he schmoozed with Jon Stewart: 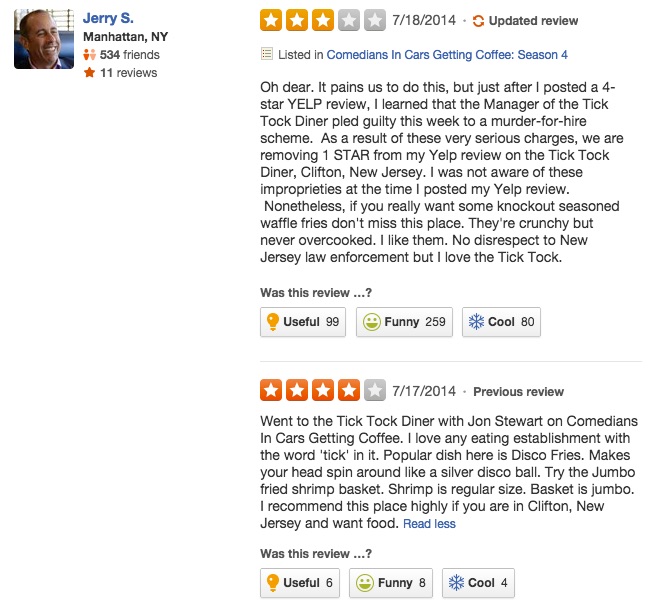 And here’s his review of Sing Sing prison, in whose parking lot he and Robert Klein filmed their episode.

When prompted for the “Things He Loves” question in his user profile, Jerry S lists:

Comedians, cars, coffee. Funny people that say funny things, painted metal with wheels, glass, leather, and the smell of gasoline. Also hot brown beverages made from 3rd world beans in recycled paper cups with beige cardboard sleeves. People who go on stage and tell funny jokes to other people who when hearing them make a sound with their body and expel air forcefully out their mouth. I also love Pop Tarts and Bic Pens.

And when he’s not yelping he’s “driving with funny people looking for coffee.”

While this could all be the work of a highly dedicated Seinfeld imposter, that seems unlikely. After “Jerry S.” left a review for the Shrewsbury, MA joint he visited with Aziz Ansari, The Boston Globe pointed out that the real Seinfeld had, in fact, told fans to expect CCGC reviews on Yelp.

Still, the account remains unverified and (aside from the Globe‘s brief nod) impressively unnoticed, considering it’s likely a fresh supply of comedy nuggets by one of the most influential comedians in decades. That said, it’s nice to know that if the whole “comedy thing” doesn’t pan out for Jerry, he can always get a job as a culinary critic.

Here’s the latest episode of Comedians In Cars Getting Coffee, with Amy Schumer: