It’s the Middle East’s most vital commodity—wars have been fought over it, and some would say it’s more precious than the blood that continues to be spilled in its name. We’re talking about oil, right? Wrong. The substance in question is plain old H20. Nowadays, the area’s water crisis—the result of moisture-sapping irrigation techniques and years of drought—is throwing Israel into a state of turmoil, even playing a role in the Palestinian/Israeli conflict. And with The Sea of Galilee at its lowest depth ever, the Jordan River barely a trickle and Israeli officials continuing to slash water quotas for farmers, locals are pretty much fed up with waiting on Mother Nature to come to the rescue. So decrying the unyielding sky, Israeli scientists are taking matters into their own hands by creating their own water-hording gadgets. Check out some of the most promising examples below. 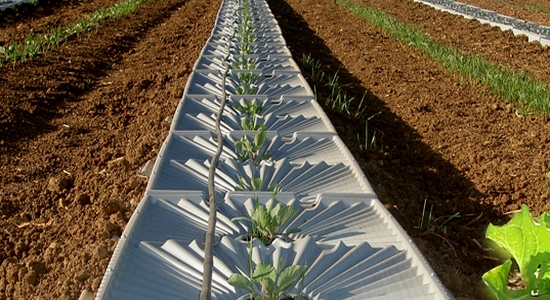 While most of the world is bathed in God’s tears, Israel must get by with his sweat: dew. Start-up company Tal-Ya (Hebrew for “God’s Dew”) aims to maximize this paltry offering by manufacturing funnels that deliver dew to a crop’s root before the drops evaporate. The idea is low-tech, but clever enough that orders are pouring in from all over Israel and Europe. So what’s up with that religiously loaded company name? “We collect dew as God’s present, like the manna the Israelites collected in the desert,” explains Yuval Naaman, a developmental engineer with Tal-Ya. Yeah, thanks for the “present”, God. Do you, by any chance, have the gift receipt?

Allow me to introduce you to a generator that runs on shit. Emefcy‘s Megawatter reactor basically “eats” sewage water and generates electricity using bacteria that break down the organic material, explains Eytan Levy, CEO and company co-founder. This allows the generator to simultaneously power itself and clean the water. According to research done by the Bristol Robotics Laboratory, â€˜bots like this could soon come equipped with gills, allowing them to freely roam the ocean—with carnivorous robots also in the works, the “Dead Sea” could take on a whole new meaning.

Israel has gone stealth when it comes to water production: stealing water molecules from the air with pilotless jets—which run on solar energy—and dropping them like rain on the fields below. Right now it’s just an idea, but inventor Mayer Fitussi at start-up company Aqua Soft says they’re looking for an investor to help them build their first prototype, which would look like a futuristic fighter plane. Too bad the locals will be too busy duck-and-covering when the water-toting fighter jets fly over to enjoy the much-needed rain.

Dispatches from the Elders of Zion, part one

Where the Hose at?